The army of key workers in social care make up one of the largest low-paid workforces in the UK. Despite their essential role, over a million people work long shifts, performing emotionally and physically draining tasks, for poor wages. It’s no secret that our social care sector has long been at breaking point. The sector has been dramatically underfunded for a decade, and the Covid-19 crisis has put unprecedented pressure on staff who were already stretched way beyond capacity.

At least half of social care workers in this country don’t earn the real living wage. That’s what the official data says – but for those working in publicly funded care homes, that number is much higher. The funding crisis means it’s rare to find a carer working in a council care home who earns more than a penny or two above the government minimum. Unsurprisingly, these workers are overwhelmingly women.

A higher number than average belong to an ethic minority, and parents and single parents are over-represented too. Paying the minimum to any worker sends a very clear message about how much they are valued. When we talk to people whose employer chooses to go further and pay a real living wage, they say that they feel more respected and that, aside from the obvious financial benefit, the increase has a massive impact on their self-worth.

Now more than ever, we need to dramatically reform this sector. Every day, our GMB union members in social care get in touch to tell us what’s happening in their workplaces. Frankly, the stories are astounding. One member raised the alarm with us after having to buy her own paper masks for her and her colleagues. Despite the offensively low wages that they receive, they all clubbed together in a desperate attempt to protect themselves and the residents they care for.

Another told me that her colleagues in the care home that she works in cannot afford to self-isolate because they are only entitled to minimum sick pay – a miserly £95.85 per week. She said that they are coming into work, despite being unwell, simply hoping that they don’t have the virus. Her colleagues have no choice – they must pay their rent.

Other members should be self-isolating or shielding for 12 weeks due to their own health vulnerability, but they cannot afford to. Instead, they come into work. They come to work, where they know there are Covid-19 patients, where they have no personal protective equipment, and where they face a very real danger to their own life. Other members told us that despite being really scared of contracting the virus, they could not bear to abandon the residents.

Every social care worker I speak to talks about their deep personal connection with the people they care for, often referring to them as their ‘extended family’. It is difficult to think of a comparable time in living memory, when our government has drafted those on minimum wage and minimum sick pay into an environment where they face the maximum risk.

The lack of PPE during this crisis has undeniably increased the risk of infection to all our healthcare key workers. It’s been over six weeks since the first person with Covid-19 died in the UK. Yet our members are only now getting access to basic disposable masks, gloves and aprons. And they are still being told to ration them, and to use a single paper mask for entire shifts.

Very early on during the crisis, the government highlighted that the elderly and those with underlying health conditions were most at risk from Covid-19. But the residents and the staff were left to fend for themselves. Six weeks into the crisis, and after thousands of deaths, the UK government announced its ‘plan for social care’, launching a badge to symbolise the efforts of the profession. The badge is patronising and ill-judged. These people need protection, proper pay if they fall ill, and a wage they can live on, to reflect the essential work they do.

Disturbingly, any future improvements will be too late for many care home residents and social care workers who have already lost their lives to this virus.   When this is over, questions will be asked about why it took six weeks for the social care sector to catch the attention of those in charge. But the bigger question we must ask is: why did we ignore our elderly, and neglect those who spend their days caring for them in the first place?

GMB is hosting a Rally4Carers event via Facebook Live at 7pm on Thursday, April 23rd. 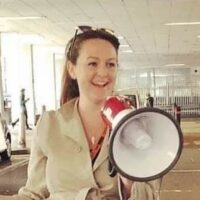 View all articles by Lola McEvoy