From the 2017 election campaign to the devastating result in 2019, one of the Labour Party’s key messages has been ‘for the many, not the few’. The policies of the most recent two manifestos undeniably contained a vast swathe of policies designed to emancipate and empower the many in society. So, beyond Brexit and the leadership, why did the electorate reject Labour so strongly in the 2019 election?

While there was an undeniable policy overload – whether this is the fault of the manifesto or of how it was reported and presented is another question – I believe it was the way our policies related to one another that truly let us down. Quite simply, the 2019 manifesto was a radical document that would have bettered the lives of the majority of citizens, but unfortunately it categorised its citizens and failed to make links across society.

Take the nationalisation of broadband, one of the headline policies of the manifesto and one of the biggest policy announcements of the campaign. This was an incredibly emancipatory policy: it would have allowed people to work from home more easily, reduced bills, and would have led to an improvement in the quality of broadband speed in parts of the country that don’t currently benefit from full-fibre broadband.

Why wasn’t it a vote winner? Because Labour did not consider how to present the policy as beneficial to the entire country. Plenty of its promotion was on social media, and focused on uses of broadband such as streaming television programmes – thereby targeting young, tech-savvy voters. In our world of social media algorithms, young people who saw this advert on social media were already more likely to vote Labour. We were preaching to the converted.

Labour also focused on how this policy would make working from home easier – something we’re all learning the hard way now. But this mainly appealed to those with jobs that allowed them to work from home: the metropolitan professionals we picked up in 2017. It was important to retain these new voters, but we should have been focused on retaining the lifelong Labour voters who switched to the Tories last December.

The point here is that, like with much else in the manifesto, Labour did not clearly explain how nationalised broadband would benefit the majority of society. The closest we got was the fact that it would be one less bill to pay. But with the flak the party was (wrongly) facing on tax rises, how was that meant to cut through?

There were countless policies that would have benefitted the majority but were not presented as such. Instead, we were presented with certain policies for certain groups in society, thus dividing our voter base and the electorate. Raising the minimum wage, free bus travel for under-25s, abolishing the charitable status of private schools and tuition fees – all of these policies and more would have been good for the many.

By framing our policies around the groups they would most directly affect – raising the minimum wage at the low-paid, abolishing tuition fees at students, and so on – we failed to unify the electorate and present our manifesto as a blueprint for a better society for all. We let ourselves down by allowing the public to think that we had created a whole host of policies with an end goal of improving certain elements of certain peoples’ lives, rather than a manifesto that would have changed Britain for the better.

What do we need to do to create a collective identity? The first thing is to talk to the electorate as a whole. It is right that we recognise the different experiences of different groups in Britain, and that we acknowledge that life is harder for some and easier for others. But if we present our policies as band-aids designed to patch up elements of peoples’ lives without explaining how these policies, combined, can be the foundation for a fairer and more equal society, then we are doomed to opposition.

The Conservatives unify the electorate by focusing on liberty. They claim that, when they’re in charge, everybody has the freedom to succeed if they choose to do so. We need to relentlessly challenge this idea in parliament and on the doorstep. We need to speak with total clarity to prove that the policies of a Labour government are truly emancipatory, far more than a deregulating Conservative government ever will be.

The majority of Britain needs a Labour government – we failed to win over those who would most benefit from this because we didn’t articulate an overall vision for a better society. We targeted our voters too specifically and didn’t create a collectivist spirit within the electorate. Labour’s 2019 manifesto had the potential to lay the foundation for an inter-generational, inter-class, multi-racial movement, which could have begun to transform Britain.

Now, and over the next four years, we must speak to the electorate as a whole and illustrate just how liberating a Labour government would be, how our policies would give Britain the genuine freedom to live well and happily. It is only by speaking to the nation collectively that we stand a chance of winning in 2024. 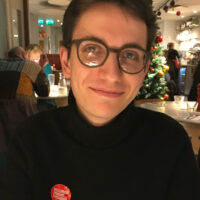 Alexei Warshawski is a Labour member.

View all articles by Alexei Warshawski