One long and anxious week after the furlough scheme for employees was announced in March, the Chancellor heeded calls from trade unions and others and unveiled the self employment income support scheme (SEISS). This paid self-employed workers affected by coronavirus 80% of their average trading profits.

I could see the problem with the scheme instantly, as I had experienced the same thing when applying for a mortgage. I remember submitting my past three tax returns, and being told that I could borrow much less than my husband – despite us being on roughly the same income – as my average over the last three years had been slashed by nine months of maternity leave.

The SEISS scheme does exactly the same thing. While 80% of average profits calculated over three years appears at first glance to be on par with the furlough scheme, any mothers of kids of four and under will automatically receive less than male colleagues on the same income. Single mums, who are more likely to have the children living with them, and therefore higher outgoings, will be hit hardest.

That’s why I started a petition asking the Chancellor to allow women who have taken maternity leave to exempt those periods from the SEISS calculation. And before long, Pregnant Then Screwed – the maternity discrimination charity I volunteer for – threw their weight behind the campaign.

We’ve had heartbreaking letters from women for whom this drop in income is not just inconvenient and infuriating, but for whom it means the difference between being able to pay their rent – never mind sustain their business or afford childcare.

There is the pregnant locum doctor unable to work due to clinical vulnerability, who will get a tiny fraction of her usual earnings as she was on maternity leave with her first child in 2017-18. The single-mum musician, whose regular freelance gig with a West End show has disappeared overnight and who will get less than a third of what her male colleagues will receive – just because she took maternity leave.

Many freelance mums we’ve spoken to have faced a double-whammy of discrimination over the years. Some find themselves among the 54,000 women a year who lose their job simply for getting pregnant, and have no choice but to set up their own business. To then be penalised three years later for taking maternity leave while self-employed is piling one injustice on top of another.

This is why last week Pregnant Then Screwed sent a legal letter to the Chancellor, Rishi Sunak. The pre-action protocol letter alleges that SEISS is unlawful, and may be in breach of both the 1998 Human Rights Act and the 2010 Equality Act.

Litigation is a risky endeavour for a tiny charity. However, with ministers giving nonsensical answers to parliamentary questions and showing no sign of addressing the issue, Pregnant Then Screwed CEO Joeli Brearely felt that we had no choice. Calls for legal representation were answered by Doughty Street Chambers and law firm Leigh Day. And the Federation of Entertainment Unions, Community Union and local businesses such as Sweet Cecily – owned by Labour candidate for Scarborough & Whitby Hugo Fearley – have all pledged their support.

But how did it even come to this? In the labour movement, we talk a lot about diversity from the perspective of fairness and equality of opportunity. However, there is strong evidence from across business that more diverse boards make better decisions. Situations like this one could have been avoided had the Chancellor sought the advice of self-employed women. But anyone watching the daily press briefings will have noticed that women are rarely asked to speak by this government, so it should come as no surprise if things run the same way behind closed doors in Whitehall.

In her book, Invisible Women – also the working title for a documentary on the daily press briefings – Caroline Criado-Perez tells the tale of temporary homes for people made homeless after a natural disaster, being built without kitchens. You’ve guessed it: there were no women involved in leading this project, and the men making the decisions made a critical omission, because it was outside their lived experience.

This pandemic has amplified the inequalities in our society, and our response must be shaped by those worst affected or we will miss vital opportunities to help. In this case, a group of men with steady incomes and few caring responsibilities decided to inflict a pay-cut on those who can withstand it the least. We cannot accept that. 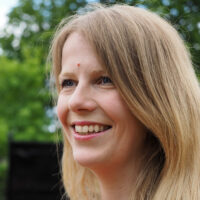 Olga FitzRoy is a freelance sound engineer and volunteer activist with Pregnant Then Screwed. She stood as Labour’s parliamentary candidate in Croydon South in 2019.

View all articles by Olga FitzRoy