In internal elections among Haringey Labour councillors this Thursday, the leadership of the Labour-controlled local authority is set to be challenged. The outcome is on a knife edge. But among the active and involved members of the local Labour Party, the view is overwhelmingly that Joe Ejiofor should remain as leader and Seema Chandwani as deputy. Today, I am sending a statement, signed by all but two of the members of the executive committee of Tottenham Labour Party, calling on Haringey councillors to vote for Joe and Seema to continue to lead Haringey Council.

It is only just over two years ago that we had a Labour administration in Haringey committed to outsourcing and the privatisation of services – sometimes politely called the ‘commissioning model’. This was the end game of several decades of neoliberal thinking across politics. It meant that public money flowed out of the council’s coffers, on to the balance sheets of profit-making companies and into the bank accounts of their shareholders. It meant a very real loss of democratic control and accountability, and of residents’ ability to shape their communities and lives.

Opposition to the course taken by local government in Haringey crystallised around the proposal to set up the Haringey development vehicle (HDV). The HDV, a private legal entity, was to be half-owned by giant Australian developer Lendlease and over time the bulk of the council’s land and buildings – including most council homes – were to be transferred to it, and the council estates were to be demolished one by one.

But the ranks of the two local parties – Tottenham and Hornsey and Wood Green – were being swelled by thousands of new members joining with the hope of a new socialist politics represented by Jeremy Corbyn. Labour activists, new and old, linked arms with local communities in rebellion against Haringey’s scorched-earth approach to public ownership and control. In the run-up to the last local authority elections, a cohort of right-wing Labour councillors were not reselected by branch members. Others including Claire Kober, then council leader, stood down when they realised that the tide had turned against their brand of politics.

The 28 months since the May 2018 local elections have witnessed a sea change in local government politics in Haringey. Joe Ejiofor has led that change. He is not the kind of leader to make barnstorming speeches. But he headed the working party that drafted the 2018 Haringey manifesto; a document that drew heavily on the proposals agreed by party members at a borough-wide conference and included the key passage: “We do not believe that the HDV provides the answer and we do not intend to progress with it.”

Now, with patience and determination, Joe is making a positive difference to the lives of the people he represents by systematically implementing the manifesto. As a first step, and despite threats from Lendlease of personal legal action against cabinet members, the HDV was cancelled. With this decision a page in Haringey’s political history was turned.

Not only has the very existence of council housing in Haringey been defended, but for the first time in years, new council homes are being built. Already construction has begun on 331 new council homes. Planning permission has been obtained for a further 357. 71 sites have been identified across the borough where 1,400 new council homes will arise. These are not the ‘affordable’ homes that other developments across London boast, but homes for council tenants on council rents, with secure tenancies. It is a radical departure from the recent consensus around housing policy – a policy that has delivered stark failure across the country. Joe Ejiofor’s administration is blazing a trail.

And, far from continuing with the obsession of the previous administration with handing services and the cash to pay for them to private companies and their shareholders, Joe Ejiofor has begun the process of bringing those services back under the direct ownership and control of the council and the people’s political representatives; facilities management has been in-sourced; decisions have been made to bring estate parking, HR recruitment and other contracts back in-house. The ambition is to end outsourcing altogether.

The previous administration said that paying all workers, employed either directly or indirectly by the council, the London Living Wage was not financially viable. Under Joe Ejiofor, Haringey has become a London Living Wage employer, and as of this summer, many home care workers – the group who have benefited most from the higher wages – have seen their hourly rate go up by over £2. And council tax support for Haringey’s least well-off families has been raised from 80% to 100% – meaning they do not have to find any money at all from their tight budgets to pay council tax. That is the way to build genuine solidarity and protect the most vulnerable.

Extraordinarily, these advances and the leadership’s strategic focus have continued even while Haringey Council has taken on responsibility for coordinating the local response to the Covid-19 emergency. Even some of the mis-steps of the administration have, in the way they have been resolved, shown a very positive side to the current Haringey leadership – because it has involved and responded to the local Labour Party.

In its first year, Joe Ejiofor’s cabinet was drawn from a ‘broad church’ of Haringey Labour councillors, and there was also some timidity in the face of senior council officers. In this context, a budget was proposed that featured cuts that would have targeted recipients of adult social care. Both CLPs passed motions opposing the cuts. The striking thing is that Joe listened and called a halt to the cuts – even though he was opposed in this by members of his own cabinet. Those cabinet members who were most keen on the cuts, and opposed to taking on board the views of the party membership, subsequently resigned or were removed from cabinet, and are now part of the internal opposition to Joe and Seema within Haringey Labour group.

As a result, both budgets passed by Haringey Council since 2018 have contained no real cuts to frontline services. The days when demonstrators stood outside the council chamber denouncing Labour councillors entering to vote through the slashing of services are, for the time being, in the past. Of course, facing a hostile national government, whose chaotic response to Covid-19 has plunged the economy into a sharp recession, there can be no guarantee that Haringey will not find itself having to work out how to avoid harsh cuts in the future. It is only by building the unity of the labour movement locally and nationally that we can devise a strategy to defeat Tory austerity. For that, we need an administration that brings party members on board. Joe Ejiofor has shown himself ready to do that.

Valid concerns have also been raised about a number of legacy development contracts inherited by this administration. Unlike with the HDV, it has not been possible to cancel all of them. Nevertheless, real progress has been made in securing more social – including council – housing. In the case of the well-known Latin Market development – on land mostly owned by TfL – the rights of the small traders are being advanced.

That is why the party members I speak to overwhelmingly think Joe Ejiofor should continue as leader and Seema Chandwani as deputy. Meetings of the two left caucuses in Haringey – the Hornsey and Wood Green Grassroots Left and the Tottenham Labour Left – unanimously agreed to back the current council leadership. Similarly, the discussion after a hustings attended by members of both CLPs demonstrated clear majority support for the current administration. A number of branch meetings recently passed motions backing Joe and Seema. The majority of members of both the Labour executive committees for Tottenham and Hornsey & Wood Green have signed statements supporting Joe and Seema. Yet, although both local parties have argued that the leader should be elected by party members – and Tottenham has made this proposal directly to Labour’s national executive committee under the new rule agreed at the 2019 annual conference – it is Labour councillors who will make the decision this month.

I am not going to dwell on the internal dynamics of Labour group. Only a councillor, which I am not, could accurately weigh the various factors that will determine the outcome of the ballot. They include a constantly changing kaleidoscope of personal relations, thwarted ambition, a remaining core of Labour right-wingers, and the shift in the Labour Party’s political centre of gravity occasioned by the election of Keir Starmer – most of councillors opposing Joe voted for Starmer, while Tottenham Labour Party nominated Rebecca Long-Bailey and Richard Burgon. Another factor is the recent ‘administrative suspension’ of several Haringey councillors.

All I can do is emphasise that party members are hardly indifferent bystanders. As well as being residents of Haringey and therefore directly impacted by the decisions the council makes, we are the party’s foot soldiers. We slog the streets to get our councillors, and other political representatives, elected. We are the body and soul of the Labour Party and its affiliated organisations. We helped draw up the manifesto on which each Labour councillor stood. If they choose to get rid of the leadership, which has done so much to implement that manifesto, they owe members an explanation for their decision.

Frankly, our fear is that the coalescing opposition to the current leadership will retreat from implementing the more radical sections of the manifesto, and act on their expressed concerns about the failure to implement budget cuts in the last two years. However, we have little to go on because so far they have done nothing to set out an alternative platform beyond observing that they propose to do “better”.

Which brings me on to my final point. Joe Ejiofor is the only Black council leader in London. Now, the colour of a man or woman’s skin should not determine their life chances. It was Martin Luther King who said: “I have a dream that my four little children will one day live in a nation where they will not be judged by the colour of their skin but by the content of their character.” Joe Ejiofor’s race should not determine whether or not he remains as leader – it is the content of his character and what he has achieved over the last two years that should do that.

But at a time when the killing of George Floyd has focused attention on the influence of racism and pervasive racist assumptions on the lives of people of colour, Joe Ejiofor has the right – and, to be frank, Black party members and Black residents have the right – to understand what it is about Joe’s character that leads his opponents to run one white candidate against him and another against Seema Chandwani, while issuing what could easily be taken as dog whistles about “competence” and offering not a single concrete example of what they would do differently. 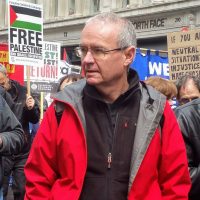 Nick Rogers is the chair of Tottenham Constituency Labour Party.

View all articles by Nick Rogers