There are towns and cities in this country that carry a particular weight of meaning. The Battle of Orgreave, one of the most violent confrontations of the 1984/85 miners’ strike. The Shrewsbury building workers’ strikes of 1972, which saw 24 working men, including TV legend Ricky Tomlinson, convicted for crimes they maintain they did not commit. The Battle of Cable Street in 1936, when thousands of Londoners successfully defeated a march by members of the British Union of Fascists led by Oswald Mosley. These are just three of many places that have become synonymous with a significant event in history.

The wonderful town of Jarrow, part of the constituency I represent, is another. 84 years ago, this proud, working-class town in the North East of England became, in the words of its MP, the great “Red” Ellen Wilkinson, “the most famous town in England”. Banners proudly held aloft and beaming with pride, 200 dignified men from the historic North Eastern town of Jarrow set off from this wonderful town on October 5th, 1936, all the way into the history books, and those iconic images of the Crusade went on to powerfully define a region and an era.

Economic recession with rising unemployment, poverty and deprivation – these are just some of the issues currently facing people across the Jarrow constituency and the wider North East region. These problems were also faced in Jarrow in the 1930s. The people of Jarrow had witnessed their precious town being murdered by a cartel of businessmen who, backed up by the Conservative government of the time, had closed the prestigious Palmer’s shipyard and left 70% of the town out of work. These were men who took great pride in going to work to provide for their families and overnight were left with nothing. No work. No pay. Nothing.

The Jarrow Crusade was led by a local man called David Riley, chair of Jarrow Council, and the town’s MP, Ellen Wilkinson. They wanted parliament, and the country as a whole, to understand that they were orderly, responsible people, who wanted the right to work. The town council, which was composed of all the political parties and people from various backgrounds, resolved unanimously to support the Crusade and give it the backing of its people, so that it could be a success.

The march caught the imagination of the people of Jarrow straight away, as it did with the rest of the public as it travelled south to London. 200 men were selected to march on the 300-mile crusade, and a petition was signed by 12,000 townspeople. It’s no secret that the Crusade did not have the backing of the Conservative government, with then Prime Minister Stanley Baldwin refusing to meet with the marchers. But the Crusade certainly had the backing of the people at home and right across the country, as the marchers lifted the spirits of everyone, offering hope, to those they met during those dark days of the depression.

Sadly, it has been well-documented that when the men reached the capital, the Prime Minister refused to meet with marchers and their pleas for work were ignored. What’s even more heartbreaking is the fact that when they got back home to Jarrow, they found their dole money had been stopped and the dreaded means-test men were waiting for them at their front doors. Although they seemed to have failed in their brave efforts to help the people of Jarrow, to this very day, the 1936 Jarrow Crusade is remembered worldwide. I have spoken to many people in the constituency who talk about the Jarrow Crusade with pride. Visitors to Jarrow will also see permanent reminders of this famous event in the form of displays, statues and murals, streets, and even beers named after the march and the marchers.

Of course, comparisons may be drawn between those bleak times in the 1930s and today. Currently, the North East has the highest unemployment rate in the whole country, with joblessness rising by 18,000 to 86,000 over the past quarter. And in the Jarrow constituency, there were 4,090 actual claimants of unemployment related benefits in September 2020, a rate of 7.9% compared to the national rate of 6.5%. This grim outlook is expected to worsen during this difficult Covid-19 pandemic, as the national furlough scheme expires at the end of this month and social restrictions continue to be enforced.

So many people are desperate. Those left without a job face the immensely difficult task of trying to find work. There are many others in work who are worried sick about losing it. With more than 1.5 million people currently unemployed across the UK, the highest number for three years, this is turning into the unemployment crisis we feared. Over the past decade, this Tory government has proved time and time again how far out of touch it is with the real world. They don’t have a clue what it’s like to worry about paying the bills. They have no idea what it’s like to struggle to gather enough money together to put food on the table and pay the rent or the mortgage. And of course, they’ve never had a bailiff turning up at the door demanding money.

Over the past decade, this Conservative government have taken us back, not forward, in terms of funding for our NHS, our schools, our welfare state, and our public services. This government’s shambolic decisions during the pandemic are also having a devastating impact on people’s lives, with workers and businesses under local restrictions in complete limbo, often confused by this government’s muddled messages. Boris Johnson and his millionaires in the cabinet don’t represent, nor care, for working people. It isn’t in his, nor his party’s, DNA.

Jarrow’s plight would’ve destroyed the spirit of a community less resilient than ours. Instead, we fought back – and 84 years on we will do it again as the Jarrow Crusade continues to provide inspiration to people across the world. That makes me proud, and we owe it to the memory of the inspirational Jarrow marchers who went all the way to Westminster to build a better Britain, a much fairer country. What those brave men did more than eight decades ago was to deliver a message of hope for people who need hope, wherever they may be. And we must take strength from the Jarrow Crusade today when fighting for higher wages, jobs and giving people a better quality of living.

Although much has changed over the past 84 years, we still live in a world of great inequalities and injustices. That’s why the Jarrow Crusade is such an inspiration to the desperate struggles people face every day, and always will be. Boris Johnson, Dominic Cummings and co should take note of the history of working-class people standing up for their dignity and for what they strongly believed was right: as the Jarrow Crusade shows, people will never give up the fight and will always make their voices heard. 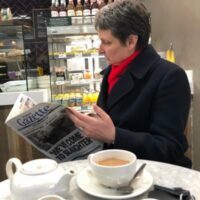 Kate Osborne is the Labour MP for Jarrow.

View all articles by Kate Osborne