‘Hardline unionism’ is a phrase that will be familiar to anyone following the Scottish Labour leadership election. Among a small but vocal segment of Scottish Labour’s membership, the term is used to deride almost any stance in favour of Scotland’s place in the United Kingdom or resistant to another independence referendum.

There is no shortage of hardline positions in Scottish politics. Nicola Sturgeon’s plans to legislate for a second independence referendum immediately after the Scottish parliament elections in May is hardline. Boris Johnson’s refusal to countenance another referendum until at least 2055 is hardline. By contrast, Scottish Labour leadership contender Anas Sarwar’s view that Scotland should spend the next five years united in rebuilding our country from the devastating impact of Covid, as opposed to divided over the constitution, is entirely reasonable.

The fact that this is being portrayed as extreme by a significant minority of the party’s activists illustrates the remarkable crisis of confidence Scottish Labour has had on this issue. Sarwar and his opponent, Monica Lennon, are both young and talented MSPs, with a zest for campaigning and a knack for generating publicity – attributes that have been in short supply in Scottish Labour in recent years. Yet the question of independence has dominated the leadership contest.

The candidates have more common ground on the constitution than immediately meets the eye. Both believe that Scotland has the right to self-determination. Both oppose independence. Both support further powers for Scotland as part of a move to a federal UK. Where they diverge is on the question of whether Scotland should have a second independence referendum. While Sarwar has argued that the immediate focus should be on fighting the pandemic, getting the economy back on track and taking action to combat the climate emergency, Lennon has said that she is “in favour of democracy” and that if people in Scotland want a referendum they should have one.

There are at least three reasons to believe that the Sarwar position is the right one. First, it’s a bad idea to hold an independence referendum in the midst of a global pandemic and economic crisis. We should say so. By emphasising democracy, Monica Lennon indicates that Scottish Labour would back a referendum if it loses the election. But she declined the opportunity to say what Labour would do if it wins. In doing so, she effectively concedes the election to the SNP before the campaign has even begun. If Nicola Sturgeon wants to make the case for holding a second independence referendum with the country still reeling from the impact of Covid, she has every right to do so – but the leader of Scottish Labour should point out the folly of that approach.

The second reason is polling. When asked to select their top five priorities for the upcoming election, only 25% of Scottish voters choose the constitution. The voters that Scottish Labour needs to win are primarily motivated by a party’s policies, vision and ability to manage the Covid-19 recovery. Even a majority of Yes voters do not think Scotland will be ready for another referendum in the next couple of years.

Third, the ‘pro-democracy’ line appears to be predicated on a belief that Scottish Labour’s problem in recent years is that it has been too hostile to SNP demands to rerun the 2014 referendum. The real problem has been an almost farcical lack of clarity and consistency on this issue. Since 2014, the various leaders of Scottish Labour have adopted almost every position imaginable on the constitution, from considering allowing Labour politicians to have a ‘free vote’ in any second independence referendum, to indicating that Labour would actively support independence in the event of a Leave vote in the EU referendum.

The Labour Party’s incoherence on the subject was demonstrated most powerfully in the run up to the 2019 general election: Scottish Labour leader Richard Leonard began the year insisting that a UK Labour government would refuse to authorise a second referendum, only to be contradicted by Shadow Chancellor John McDonnell in an appearance at the Edinburgh Festival. The inevitable result was that just 59% of voters at the general election said they knew what Labour’s position on Scottish independence was.

As a Labour candidate in that election, I experienced first-hand the challenges in trying to defend complex answers to binary constitutional questions on the doorstep. On Brexit, Labour pledged to negotiate a new deal with the EU, hold a ‘final-say’ referendum within six months with the choice between Labour’s deal and remaining in the EU, and determine what position the party would ultimately support at a special conference in the buildup to that referendum. Voters didn’t buy it. The problem with the Lennon position – of welcoming an independence referendum but opposing independence – is that it sends mixed messages. The Sarwar position does not.

If he wins the leadership race, the question that Sarwar will quickly have to grapple with is: if now is not the time for a second independence referendum, when is? One sensible approach would be set out a series of conditions governing the timing of a future poll: these could include, for instance, that there is no community transmission of Covid, the economy has returned to pre-Covid levels, and the majority of Scots support holding an independence referendum within a year.

Sarwar could go further still and advocate enshrining in legislation rules about when and how future referenda would be held, to take the constitutional question outside the realm of day-to-day party politics. That way, Scottish Labour might just be able to switch the focus to policies that actually affect people’s daily lives: extra funding for the NHS, the introduction of a National Care Service and a comprehensive plan for green jobs. There’s nothing hardline about that. 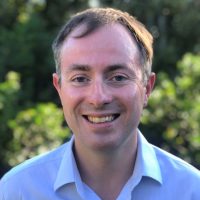 Andrew Hilland is a former adviser to Gordon Brown. He was the Scottish Labour candidate for Lanark and Hamilton East at the 2017 and 2019 general elections.

View all articles by Andrew Hilland