The Prime Minister last week set out the roadmap that the government has in mind for coronavirus restrictions, but there was no clear sense of direction for businesses and families. Yet again, the government detached decisions about dealing with the health crisis from decisions about how to support the economy – the mistake they have made again and again since last March.

Instead, it’s a full week later that the Chancellor gets his moment in the sun. In keeping with his carefully-curated brand – lots of graphic design, zero accountability – he didn’t turn up to last week’s opposition day debates where Anneliese and I pressed on economic support for families and businesses, but on Monday he did find time to put a new five-minute video out.

When he finally turns up to the House of Commons this week, the questions about timing aren’t just about being late. At the weekend, he was evasive and uncomfortable when Sky’s Sophy Ridge put it to him that there’s story after story of the Chancellor telling backbenchers that taxes are going up now so they can be cut for election time.

It’s what we expect from the Conservatives, but the sheer shameless irresponsibility never ceases to shock. They’re putting their party first and our country last. Their decisions about taxation and spending aren’t based on what’s best for Britain, for families, or for businesses – they are simply looking at what’s best for them.

Organisations from the CBI to the OECD to the IMF are agreeing with Labour that now is not the time for immediate tax rises. Trying to increase the tax take from a diminishing base in the middle of the worst crisis of any major economy isn’t fiscally prudent – it’s economically illiterate. And we’re in this position because a decade of Conservative ideology weakened our country’s foundations before this crisis hit, while their incompetence and failure to act since has made things worse.

What we’ve seen in the last few weeks is repeated kite-flying from the Chancellor about tax rises and the pace of fiscal consolidation – because he’s more interested in framing his budget and building his brand for his backbenchers than he is in offering certainty and clarity to Britain’s families and businesses. And we need to be clear what he’s up to politically when he talks about moving to balance the books fast after the pandemic. We need honesty about the nature of the debt that has been accrued in the last year. There are precedents for taking a much longer-term approach to dealing with significant borrowing from extraordinary times, most obviously wartime debts.

What Sunak wants is to get everyone back into the simple and wrong-headed framing of government debt being exactly like personal credit card debt. It’s wrong economically, and it’s a political trap. If the framing in the years ahead is “how fast can you pay down the debt?”, then the Tories have the goalposts just where they want them. The questions we should be focusing on as a country, as a party, and as a movement are instead about jobs and about growth.

With all that in mind on Wednesday, there are things we need to see – and things we instead expect to see.

We need to see urgent action extending furlough for jobs in sectors which are clearly not going to be able to go back to how they were. We’d like to see that targeted on firms that actually need it – “smart furlough” – as we’ve repeatedly argued, and made conditional on firms signing up to industrial and environmental standards and with greater support for training built in.

What we expect we’ll see is a blanket extension that isn’t long enough for the jobs that need most help, doesn’t spend public money efficiently, and doesn’t do anything to make our country a better or cleaner place to live and work.  We don’t know the details, but we know it’s coming, because in keeping with the reputation the government has around competence, the Business Secretary announced it by mistake.

We need to see action on business rates for retail, hospitality, and leisure, and the temporary cut in VAT for hospitality, tourism and culture. It’s astonishing that the Tories currently plan to roll these back next month even while social distancing means shops, pubs, restaurants and hotels won’t be operating as they used to. Again, the government should be smarter with the rate cut and look to learn from what Wales did back at the start of the first lockdown, where the Labour government targeted the rate relief at smaller shops. We imagine we’ll see some change, but we’re not hopeful we’ll see what businesses need.

We need to see the government taking seriously the issues British firms, such as those in the Federation of Small Businesses, are raising with us around debt – and moving to an income contingent model for bounceback loan repayment. We expect we’ll see more loans offered to businesses, but little help with the debt businesses already have.

We imagine they’ll make a few announcements about what you might broadly call regional policy.  They’ll probably tell us where they’re putting “Treasury North” – which may or may not disappoint Tees Valley Tory Ben Houchen, whose public argument for the jobs moving to Teesside is that Treasury civil servants should experience the appalling bus services for which he is responsible and which Tees Valley residents have to suffer (I’m not making this up – you can listen here, from 06:45).  And when Sunak tells us how many jobs are moving to Treasury North, remember that almost 7,000 civil service jobs have been scrapped in the North East alone since 2010. That’s been a 19% cut.

The Chancellor may give us a bit more detail on the much-trumpeted levelling-up fund, which they are using to undermine devolution across the UK, and on the UK Shared Prosperity Fund, which is supposed to be the replacement for EU structural funds. We might also hear something from the Chancellor about free ports, one of his favourite ideas, although one for which we think the case is pretty weak at a national level.

What else might we see? As with every budget, the Treasury uses the weeks leading up to the budget to test public reactions to different briefings – to see how possible policies go down with think tanks, businesses, electors and tax professionals. Given all the noise they’ve made, we’d not be surprised to see some sort of change to corporation tax, and there the devil will be in the detail, though Labour’s position is clear: now is not the time for immediate tax rises.

Of course, nobody thinks the UK’s current arrangements on corporation tax are what we would have if Labour had been in power for the last decade. We’ve been saying for years that the Conservatives are in the wrong place on it, allowing the UK to fall out of line with comparable economies. So a long-term plan that looks to fix the problems would be welcome. But we are in the middle of an economic crisis and we need all our focus to be on growth.

It is simply not the right time for an immediate tax rise on businesses. The biggest problems for businesses are their looming business rates bills and wondering how to cope with high levels of debt. The Chancellor still hasn’t announced what will happen with business rates, leaving things to the last minute yet again. And he hasn’t set out a plan to deal with high levels of debt.

Hiking taxes on struggling businesses and families now is so daft, it’s hard to believe the Chancellor is proposing to do just that. But then of course, he set the pattern back in November with his stealth council tax rise – a 5% hike kicking in next month, while the pandemic is still raging, forcing families to tighten their belts and stop spending, just when we need to rebuild confidence in the economy.

This week, we are at a fork in the road. Beyond the rhetoric, the Conservatives want to go back to the same insecure economy and unequal country that’s been so cruelly exposed by the virus. Labour believes Britain can seize this moment to create a secure and prosperous economy for the future.

That means creating the conditions for new jobs and for people to invest in our economy. It means breathing new life into town centres and high streets. It means providing much more security at work. It means creating growth across the country – every sector, every nation and region, every city and every town. That’s what we desperately need to see tomorrow. 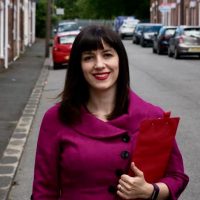