Ten years ago today, 69 people, the majority of whom were teenagers, were callously murdered by a right-wing terrorist on the Norwegian island of Utøya. They were there to attend the annual summer camp organised by the AUF, the youth section of the Norwegian Labour Party. In some of the opening scenes of the film 22 July, which is the story of the attack and the aftermath, one of the young members Viljar Hanssen tells the camp: “Everyone is welcome, regardless of nationality, and if I were Prime Minister that’s what I would stand for.” When you read more into the 69 who were killed, you learn more about how they had their whole lives in front of them and were committed to creating a better and kinder world.

I had been a member of the UK Labour Party for just over a year at the time of the attacks, which also saw the bombing close to government buildings in Oslo two hours before. I was 20 years old and, like many of those at the summer camp, I decided I wanted to get into politics because I had the desire for a better and kinder world. It was around this time that I was starting to make friendships with other young members in our party (both locally and nationally) and go to events and activities similar to the AUF’s where we would chat with one another and discuss the ideas that inspired us as activists.

With everything that has happened politically in the world in the last ten years, it would have been easy, unintentionally, to overlook the events of that tragic day. But with today’s tenth anniversary, we in the UK Labour Party pride ourselves on our internationalist and socialist values and should more than ever reflect and remember all those whose lives were taken that day.

In the recent Senedd elections, in which I was a coordinator, having young people involved at the heart of the campaign was important. Not for the sake of it, but because we firmly believed our young peoples’ voices deserve to be heard. As we said repeatedly throughout the campaign, young people are a key part of the present as well as being our future. 64 of the 69 people who were murdered that day were under the age of 30. They were individuals who would have no doubt gone on to create that better and kinder world.

Let us use today’s anniversary – irrespective of whether we knew those who were murdered or not – to remember those who died at Utøya, and to make sure that their dreams and aspirations become ours. Otherwise, we are letting down not merely those young people but all young people, including our current young generation of activists, wherever they are – in Norway, the UK or elsewhere in the world. That better and kinder world can, and must, be achieved. We owe it to them. 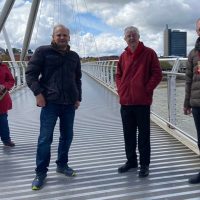 Andrew Bettridge is a Labour member and communications manager for John Griffiths MS.

View all articles by Andrew Bettridge