All of us in South Yorkshire know our transport system is broken. Journeys that take minutes by car take hours by bus, tram, or train. Our public transport network is fragmented, unreliable and far too expensive. And yet many wouldn’t even think about walking or cycling on our congested roads.

The root cause is privatisation. Over the past 30 years, private companies – despite massive subsidies by taxpayers – have run services into the ground. In a vicious cycle, they cut routes, then complain that passenger numbers fall. Rather than investing in the next generation of clean vehicles, they continue running vehicles that contribute to air pollution and the climate crisis.

Make no mistake: the transport crisis will be the central issue of the upcoming election. I’m standing to be the next Labour mayor of South Yorkshire because we can fix this. My plan will transform our region with investments in transport, industry and skills that start to put a Green New Deal into practice.

First and foremost, I’ll make the upcoming mayoral election a referendum on bringing our buses and trams back into public ownership. Setting up a London-style franchised network is an essential start – but is by no means the final destination. Having public transport in public ownership is the best, indeed the only, way to establish meaningful public control and put passengers before profit.

As mayor, I will set up a tram and bus company with workers and passengers on the board, bringing their knowledge and experience to bear when making key decisions. A good public transport network will transform opportunities for every community in South Yorkshire – enabling residents to travel to the schools, colleges, jobs and hospitals that they need to get to. And by buying local, our public company will support the engineering and manufacturing firms of our region that are already starting to innovate in new, green technology.

I will make sure that any public money spent benefits the public of South Yorkshire. This will be the core ethos of the mayoral authority: all the mayor’s spending and investment will follows the principles of community wealth building. I’ll make receipt of any money from the mayor conditional on good standards – including recognition of a trade union, payment of a real living wage, and use of sustainable environmental practices. By enacting this, we will spark a green, democratic transformation of our economy and workplaces.

This transition to a net-zero economy must work for everyone. In South Yorkshire, we’ve seen first-hand the scars inflicted on communities when workers are beaten down – literally in events like Orgreave during the ‘84/’85 miners’ strike – as major economic dislocation is forced through. This transition will be a just transition with every worker, young or old, offered education and training to take up roles in the green industrial revolution.

Our former coalfields can power our future – through good, unionised jobs in hydrogen and renewables. Restoring natural carbon sinks such as peatlands and woodlands will help undo the pollution we’ve released into the atmosphere.

So how do we achieve this agenda? We need a campaigning mayor who will take the fight to the Tories and unite the Labour Party and the public around a shared vision for transforming South Yorkshire.

The political landscape of our region has transformed, with the loss of Penistone and Stocksbridge, Rother Valley and Don Valley to the Tories, and many other seats nearing that precipice. But the fact we went on to lose Hartlepool is a warning sign that 2019 was not a one-off. We need to change our approach to communities who feel taken for granted. Simply acknowledging people’s problems but failing to offer serious solutions will not be enough – we need to prove to people that voting Labour can make a difference.

This is all the more important given the Tory government’s strategy of divide and rule. Their overall approach with policies like the great ‘Rail Betrayal’ continues to condemn the North. But employing pork barrel politics, Tory ministers have diverted money to key marginals as token gestures. Their hollow rhetoric can only be exposed by a Labour mayor who delivers. But the flip side to this is that, by showing people the real difference a Labour mayor can make, we can win back voters ahead of the next general election and makes sure South Yorkshire plays its part in electing the next Labour government.

I’m proud to live in a region of makers, creators, innovators – people I’ve studied alongside, worked with, and represented for all my adult life. It’s in that spirit that I’m standing to be Labour’s candidate. I ask you to join me – because together, we can build a movement that will transform South Yorkshire. 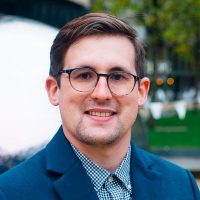 Lewis Dagnall is standing to be Labour's candidate for South Yorkshire mayor.

View all articles by Lewis Dagnall