The current talks in Vienna may help to put the brakes on Iran’s accelerating nuclear programme, but they will almost certainly do nothing to stop Tehran’s ballistic missile programme or its support for terror groups that have caused chaos and bloodshed across the Middle East. But the talks will also do nothing to ease the plight of another group of people who suffer due to the Islamic Republic’s pernicious policies: the people of Iran themselves.

As I outline in a new paper about Iran published by Labour Friends of Israel (LFI), the Iranian people have suffered the most appalling human rights abuses for four decades. Sadly, there is evidence that this situation is worsening. The regime is becoming more brutal in its efforts to crush rising discontent. Driven by a mixture of economic and political disaffection, the most recent wide-scale protests, which occurred in more than 100 cities and towns in November 2019, saw the security forces kill about 1,500 people in a couple of weeks.

The regime also keeps a tight leash on both the media and civil society. Trade unions are banned, strikes illegal and human rights groups harassed and shut down. Wide-ranging legislation criminalising acts “detrimental to the fundamental principles of Islam” is used to suppress free speech. Nor are dissenters who have fled abroad safe from the long arms of the Iranian state. In December 2020, Iran executed the dissident journalist Rouhallah Zam on the charge of “sowing corruption on Earth” after abducting him while he was visiting Iraq. As the regime tightens social media restrictions, it also widens the use of the death penalty. New legislation will add carrying out abortion to the long list of crimes that are already punishable by death including same-sex relations, drinking alcohol and adultery.

As Iran expert Kasra Aarabi argues in his contribution to the LFI paper, Ayatollah Ali Khamenei’s plans to forcefully impose what he terms the “next stage of the Islamic Republic” (in reality, an effort to snub out “deviating” influences and “purify” the state by empowering its most radical and ideological influences) mean this bleak picture is likely to further darken. The rigged presidential election last year saw Khamenei’s handpicked loyalist Ebrahim Raisi become president. Raisi, who sat on the notorious ‘death committee‘ in 1988, is a regime apparatchik with an apparent indifference to violence born of a blood-soaked record.

Raisi is also close to the Islamic Revolutionary Guard Corps, Khamenei’s brutal ideological army, which can be relied upon to put down any challenge to the regime at home, as well as within its puppet proxies in the region. We can expect further unrest as the supreme leader’s aspirations clash with an increasingly liberal and secular society. Indeed, polls show that nearly 70% of Iranians want a secular state.

Britain can and should do more to show the Iranian people our support and solidarity. It is shocking that two years after the government announced the first tranche of sanctions under the new Magnitsky Act-style regime – which is designed to punish gross breaches of human rights – no Iranian individuals or entities have been named. Indeed, while sanctions imposed when Britain was a member of the EU have been rolled into UK law, this list has not been added to in nearly a decade. While the EU and US both imposed new human rights sanctions against Iran last year, Britain did not follow suit, leaving those responsible for a litany of human rights abuses over the last ten years unpunished.

There is no shortage of potential candidates to be sanctioned. Ali Ghanaatkar, for example, acted as head of interrogations and as judge in the notorious Evin prison, where a number of British nationals including Nazanin Zaghari-Ratcliffe have been detained. Gholamreza Ziaei is the former head of the prison. He was put on the US sanctions list in 2018 and the EU’s in 2021. Ali Rezvani is an Iranian state media journalist. He has not only been involved in the interrogation of detainees but, as my colleague Chris Bryant suggested in a Westminster Hall debate last year, has also revealed detainees’ interrogation files, broadcast forced confessions and spread misinformation regarding political prisoners, dissidents and hostages.

The omission of any Iranian human rights abusers underlines some legitimate questions about the Magnitsky Act sanctions. The government must therefore introduce clear and transparent processes. There should, for instance, be publicly available and consistently applied criteria underpinning the reasons why individuals are sanctioned. The sanctions regime should be flexible to allow swift responses to human rights abuses, but there should also be a regular review process. A mechanism should be established to ensure that human rights groups and others can submit – with reference to the previously mentioned criteria – the names of those who they believe should be sanctioned, together with supporting evidence.

It is easy to sometimes feel powerless in the face of terrible abuses of human rights abroad. That is why we must use the full force of the powers that we do have to deter and punish those who show so little respect for them. 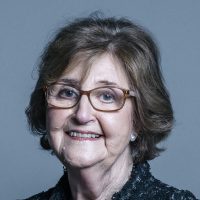 Meta Ramsay, Baroness Ramsay of Cartvale, is a Labour peer in the House of Lords. She is the Lords chair of Labour Friends of Israel.

View all articles by Meta Ramsay