Britain has been through a lot in recent years. The pandemic has inflicted huge damage on the country, our communities, families and individuals. Too many have lost loved ones and countless others, including some of my friends and family, have been sick or are still coping with the effects of long Covid. It is important to remember though that the pandemic only added to challenges the country was already facing, including more disconnected communities and a growing epidemic of loneliness. A decade of austerity increased the pressures on many people. And many of the divisions created by political upheavals, including the Brexit referendum, are still with us.

Batley and Spen, where I was born and brought up and which I now represent in parliament, has been through a lot too. After the murder of my sister Jo Cox in 2016, people came together in all kinds of amazing ways, but sadly during the by-election campaign last year, outsiders came in to try to divide our community again.

I have learned that whatever the challenges, the power of community can get us through and help us recover. The Jo Cox Foundation and the volunteers at More in Common Batley and Spen, for example, continue my sister’s legacy and work to heal – not widen – divides. Across the country, when the pandemic struck, it was ordinary people in their communities who were the first line of defence against the virus, looking after their neighbours and supporting the places where they live.

These acts of community power, however big or small, all help build a country we can be proud of. One where people can see, feel and make change locally, where there are the spaces and places to meet others from different backgrounds. In my view, this activity at the local level helps underpin national cohesion.

Strong, diverse and well-connected community networks spread opportunity and promote social mobility. They increase well-being and impact physical health. Studies show, for example, that lower levels of social connection can result in higher rates of cardiovascular disease. And strong communities protect us against the ‘us versus them’ narratives that can foster prejudice, isolate people and lead to loneliness.

This is why it is so regrettable that even before the shocks of recent years, so many things that held society together were starting to disappear. Nearly 30,000 pubs have closed since the 1970s. Libraries, community spaces and youth centres have disappeared in alarming numbers. On average, 4,000 publicly-owned spaces are sold off every year. This depletes what we call ‘social capital’: the connections between people and the feelings of trust that these networks help to generate.

A disconnected, divided society inevitably threatens the cohesion of the nation. And it leads to a growing chasm between the places where people live and Westminster, where so many decisions that affect those same places are taken.

In my by-election in Batley and Spen last year, turnout was 47.5%. I was told that, compared to similar contests, this was pretty good, but that is still over half of the constituency not voting. That would not happen if people really felt that the system was working for them and that they had a stake in it.

A recent study for the international More in Common organisation found that fewer than one in 10 people in Britain think that the government is making life better in their community. It is hard for a society to be more cohesive when people feel it does not work for them and that they do not have a stake in it.

The government says that ‘levelling up’ the country will not only be good economically, but will also contribute to social cohesion. It sounds good, but unsurprisingly, most people are confused about what levelling up actually means.

It also does not help to build trust in the system when ministers cherry-pick high-profile projects that are often not in the areas of greatest need. Worse still, these funding pots are centrally controlled from Whitehall with decisions continuing to be made by officials behind closed doors, far away from the people affected by them. Communities have little or no say in what happens to them. By contrast, research from the think tank Onward and the Cambridge Centre for Housing and Planning Research suggests that the most successful regeneration projects have had community-led elements to them.

According to the More in Common study, people think decisions about their community should be taken locally. They want to see their parks and green spaces improved, revamped high streets and a sense of purpose restored to their community. And crucially, society is undermined if crime is not tackled and young people lack opportunities.

I am proud to be from Batley and Spen. Each town and village has its own identity, but the problems they face are similar as they are in much of the country. Pride of place is what drives me to want to make this area even better. If levelling up is a lot- tery or a competition judged in Whitehall, it will not make enough of a difference to our communities. For levelling up to mean something tangible, communities must be in the driving seat.

The moment for community power

If we really want to level up – and we do – then it is time for community-powered politics to take hold. In the short term, Labour should be arguing that more money from levelling up funds goes into the hands of community-led partnerships. One way would be for 25% of the UK Shared Prosperity Fund to go towards the development of social infrastructure at the neighbourhood level.

The Community Ownership Fund could also be adapted to make it easier for more disadvantaged communities to benefit. The aim of all this is to have more community-owned spaces that can bring people together.

In the long term, we need to put community power at the heart of our vision for the country so that people feel they are in control, connected to others and contributing to a national sense of togetherness. This could come through a new Community Power Act.

I am a strong believer in convening all those with the ideas and the resources to make change happen. So, wherever possible, community partnerships, involving local authorities, businesses and local people should be in the driving seat. Communities should have the power to take control of vacant spaces on their high streets to restore civic pride. Community businesses, as advocated by Power to Change and others, could occupy properties that otherwise lay empty for years.

A society that faces challenges such as ours, that can feel as divided and disconnected as ours, and is as unequal as ours, is one that cannot prosper as it should. Empty slogans are not the answer, but a new community-powered politics could be. One that enables communities to exercise their power, restores pride in places we all share, brings people together and helps revive faith in our political system. If we can unleash community power, we can start to rebuild the country from the bottom up and use that power to transform our communities and make Britain a better connected, more productive and happier place to live.

This essay first appeared in the Fabian essay collection ‘Communities in Control: Pushing power down to spread prosperity out’. 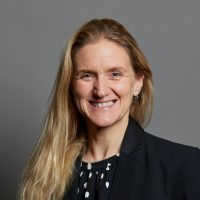 Kim Leadbeater is MP for Batley and Spen.

View all articles by Kim Leadbeater