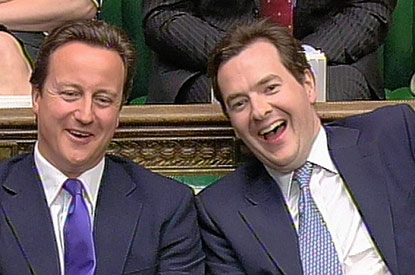 Today’s ICM/Guardian poll showing that Labour is still being blamed for the current economic woes may be front page news. But worryingly it’s not a new issue – polls have regularly showed that this is a weak flank for Labour. The regular Yougov economic tracker has even shown in every single poll this year that more people blame Labour for the current spending cuts than blame the Tory government.

The latest Yougov figures show 38% holding Labour responsible for the current spending cuts, compared to just 22% who blame the government. In fact since the general election, the proportion who hold the Tories responsible has not risen anywhere near as much as it should have, only increasing from 17% to 22%.

The Tories are clearly winning the political argument with their simple message that the current economic mess is Labour’s fault and only they can be trusted to clear it up.

Of course this Tory argument flies in the face of economic reality. The facts are clear. Following a mild stimulus programme, economic recovery from a global crisis began under Labour in the third quarter of 2009 with the economy expanding by 2.8% over the next four quarters. It was with the announcement of the Tory austerity programme at last year’s Comprehensive Spending Review that the economy began to stagnate, with just 0.5% growth over the following year.

As austerity is clearly not working, the two Eds have correctly sought to reshape the economic debate onto jobs and growth and away from the Tory defined ground that the deficit is the single biggest issue in British politics.  This makes economic and political sense. Economic stagnation – or even worse a return to recession – is the biggest threat to the living standards of millions of people and, as Cameron was forced to admit yesterday, a lack of growth makes it harder to pay back the deficit.

Politically, the spending cuts to public services remain deeply unpopular, with 70% saying they will suffer personally, 57% saying they are unfair, and 47% even think that they are bad for the national economy against 34% who think they will do some good.

But Labour’s messaging is being lost in the fog of political war. Instead the Tories are winning the argument that “there is no alternative”. A massive 57% think that the cuts are necessary. It seems a clear cut case, as the saying goes, of ‘whoever sets the terms of the debate wins it’.

So as long as Labour cedes the terrain that some cuts are inevitable, then it is likely that the Tories will simply continue to be able to use this as proof that they are broadly doing the right thing, even if it is painful for the population.

Instead, Labour needs to lead the debate that cuts are not the cure – as experiences from Ireland, Greece and a host of other counties show. By explaining that cuts hinder and not help the economy and so ruling them out, the blame for the current stagnation could more easily be laid at the Tories’ door. Then the real economic choice could come to the fore: ideologically driven Tory cuts -or Labour’s jobs and growth plans.

Lee Brown is a member of Walthamstow CLP

View all articles by Lee Brown