It’s becoming increasingly clear that Tory mayor Boris Johnson isn’t too keen on being referred to as a Tory. Or a Conservative for that matter. That’s perhaps surprising – and certainly won’t help him become Tory leader (a job which he seems at least as keen on as London Mayor).It’s not unusual in mayoral races – where the candidate is key – for election literature to play down the party affiliation or push the “name” as its own brand.

But Boris Johnson is trying to take that to a new level – producing leaflets with not one mention of his party.

With the Tories trailing Labour in London by 12 points, it’s not surprising that he wants to avoid being tainted with the brand, but the extent he’s gone to is quite surprising. Even the legally required “imprint” on the leaflets says “BackBoris2012” rather than the Tory Party, and the GLA candidate is mentioned too – without any reference to the party they’re standing for. It’s not due to lack of space either – one leaflet manages to mention Ken Livingstone six times, without mentioning Cameron or the Tories once.

You can see Johnson’s attempts to hide his Tory Party membership (not once, but twice) here and here. In the meantime here’s a picture of Boris with David Cameron – a man whose job he wants, but whose name he evidently doesn’t wish to be associated with… 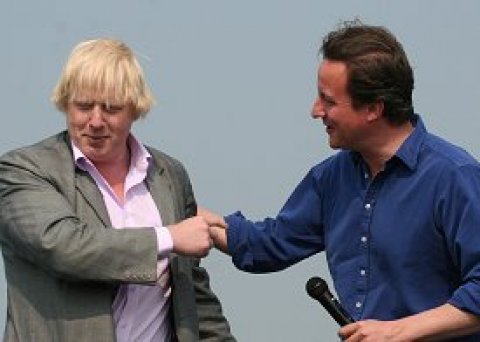 We’re sure these aren’t the only examples of Boris trying to distance himself from the Tory government. Email us with any examples you have and we’ll post some of the best ones.