According to the Guardian:

“The Labour party has complained to the police over an election leaflet purporting to come from George Galloway’s Respect party, which refers to Labour as a “party of closet racists” who are prone to “anti-Islamic bigotry”. The leaflet, entitled “Respect Yourself”, was allegedly sent to a number of Asian households in Rotherham…”

Here’s the leaflet (via the Rotherham By-election blog): 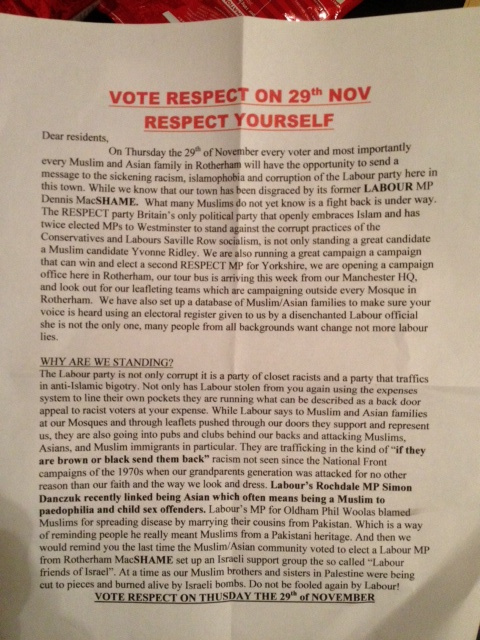 Respect candidate Yvonne Ridley has denied that Respect was responsible for the leaflet. However, in Bradford West earlier this year, a leaflet was produced attacking Labout that memorably said:

Galloway denied at the time that the leaflet had come from him. Yet the Guardian now reports that:

“The day after Galloway overturned Labour’s 6,000 majority, his press officer, Ron McKay, confirmed to the Guardian that the leaflet had been sanctioned by Galloway.”

Update: Respect recently posted a video of Lee Jasper canvassing for support outside a Mosque in Croydon.