Eight years ago Tony Blair used his Davos visit to lay out the UK’s agenda for the G8 Presidency. He proposed a doubling of aid and 100% debt cancellation for the poorest countries, in order to mobilise resources for the Millennium Development Goals. At the Gleneagles summit six months later the G8 agreed to both of his headline proposals, albeit with less success on trade and climate change. These were hard-won prizes, the result of intensive diplomatic effort and use of precious political capital.

Last month it was David Cameron’s turn to use Davos as a staging post for his G8 year, which culminates in June in Northern Ireland. He called for improved transparency over aid, natural resources, company ownership and land deals, and told the assembled super-rich and multinational corporations it was time to ‘wake up and smell the coffee’ on tax avoidance. However, the path from Davos to Lough Erne is rockier than Cameron may want to acknowledge. If he can deliver a meaningful G8 agreement on transparency and tax it could be transformative for citizens of both developed and developing countries. But it will take more than warm words to turn Davos ambition into action.

At this stage in 2005 Blair’s Commission for Africa was already well underway, preparing much of the policy that was to underpin the Gleneagles Communique. Cabinet members and British embassies around the world had been given clear instructions to win support for the Africa-focused G8 agenda. Gordon Brown was negotiating with his fellow Finance Ministers to secure a package on debt relief. Amongst the G8 leaders Blair had forged an alliance with Jacques Chirac on innovative financing mechanisms for development and George W Bush had recently launched a multi-billion dollar emergency programme on AIDS. A political and diplomatic effort was gathering rapid momentum.

Success this year will require similar levels of effort and political will on the international stage. Developing truly transparent, accountable and open governments is not a quick fix, and these principles need to be applied equally in rich and developing countries. There is a real risk that the need to focus domestically on persuading sceptical Conservative backbenchers of the merits of investing 0.7% of the UK’s national income on overseas aid programmes will crowd out the time needed for winning global support. In Europe, the in-out referendum and arguments over the European budget (where confusingly the UK is not supporting the proposed level of international development spending) have taken priority.

The Labour Party should now hold the government accountable for their G8 ambition. Cameron’s Davos agenda is potentially progressive and empowering to citizens in some of the world’s poorest countries. It should be welcomed. But it will take a herculean political effort to bring his own party with him on UK aid spending, while winning global agreement on tax and transparency reforms in June. He must now decide how much he wants it.

Joe Powell is Senior Policy & Advocacy Manager at ONE. This post is part of International Development weekend on LabourList – you can join the debate on these issues at YourBritain 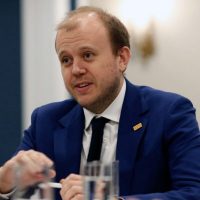 View all articles by Joe Powell