People may have read today that I am considering legal action against the Secretary of State for Health. This, I accept, would be an extraordinary step to take. But it is necessary because of the exceptional circumstances in which I find myself.

So I wanted to set out what’s at issue clearly and precisely.

On Friday afternoon, the Secretary of State for Health sent out the following tweet:

This is an extremely serious allegation to be made by anybody. But it is all the more serious when it comes from a serving Secretary of State against a predecessor. It needs to be considered in the context of a series of events that started with my arrival in the Department of Health in June 2009 in the aftermath of the initial revelations of failures at Stafford Hospital.

Establishing a proper investigation into what went wrong was one of my first priorities.

The official advice I received from the Department was not to hold any further inquiry. I rejected that advice and, in July 2009, appointed Robert Francis QC to head an independent inquiry.

Robert Francis’s first report was published in February 2010 and told in horrifying detail what had gone wrong. He recommended a second-stage Inquiry into the policies and practices of the regulatory bodies, including the Department of Health. I accepted his recommendation and asked him to begin this work immediately.

It was this second-stage Inquiry that was subsequently upgraded into a full Public Inquiry by the incoming Coalition Government. The three-year Francis Inquiry, to which I gave evidence, looked in detail at the Department of Health, the CQC and Monitor. It concluded:

“There is no evidence that any Minister received or ignored advice that would have led to safer outcomes. No criticism of the conduct of any Minister is intended in this report’s findings.”

On the day it was published, the Prime Minister said in the House:

“Let us also be clear about what the report does not say. Francis does not blame any specific policy, he does not blame the last Secretary of State for Health and he says that we should not seek scapegoats.”

David Cameron rightly continued the same cross-Party approach that Labour had adopted on Stafford, with both sides of the House apologising to the families of loved-ones who had suffered. But then something changed. After the Francis Report was published, the Conservative Party decided to change tack and politicise the whole issue of hospital failure.

What has followed can only be described as an orchestrated smear campaign against the last Government and the integrity of Ministers who served in it.

First, it was claimed I had ignored a letter from Professor Brian Jarman providing a list of hospitals with high deaths rates. Not true. On receiving his letter, I immediately referred it to the independent regulator. Then came the CQC’s internal report on its handling of failures at Morecambe Bay. Even though the alleged deletion of the report happened in 2012, on the Coalition’s watch, it was claimed Labour had ignored the problems at the hospital. Again, not true. Next came the publication of the Report by Professor Sir Bruce Keogh into hospitals with high indicators in 2011 and 2012.

In advance of the report, Conservative sources briefed newspapers that 13,000 people had died unnecessarily at the hospitals since 2005.

In an extraordinary diversion from established Parliamentary practice on matters of such seriousness, Jeremy Hunt carried this overtly political tone into his opening statement in the House of Commons.

When the full Keogh Report was published, it did not back up the pre-spinning from Tory HQ or the partisan tone of the Secretary of State. Indeed it said:

“It is important to understand that mortality in all NHS hospitals has been falling over the last decade: overall mortality has fallen by about 30% and the improvement is even greater when the increasing complexity of patients being treated is taken into account.”

On the 13,000 figure, Keogh specifically said that it would be “clinically meaningless and academically reckless” for people to make any calculations of this kind.

It was hard not to conclude that the Conservative Party had deliberately briefed unfounded accusations about the past failings at troubled hospitals for their own political purposes.

So, against this background, we come finally to claims made this week about Basildon and Thurrock University Hospitals NHS Foundation Trust.

In response to a Freedom of Information request from a Conservative MP, the Care Quality Commission released internal emails on the handling of problems at the hospital. Newspaper reports claimed the emails showed I had tried to block publication of information on failures at the hospital. Here are the emails as redacted and disclosed by the CQC (click on images to see full size): 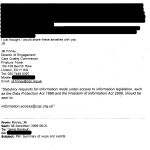 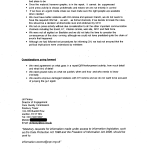 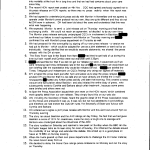 The pertinent parts are paragraphs 10 and 11. They relate to a media briefing from the CQC press office given without the authorisation of the CQC leadership. The release of information about any hospital failure is a serious matter. It needs to be handled in a considered manner and according to an agreed process.

This did not happen in the case of Basildon.

The email from CQC specifically states that it had “broken CQC/DH rules”. The next sentence correctly summarises how I felt about that breach of normal process. It goes on to say that the Department, on my instruction, ordered CQC and Monitor to issue a joint press release later that day in the proper manner. There was never any question of information being withheld.

Following this, at my own instigation, I made a full statement to the House of Commons on Basildon at the first opportunity. I promised to update the House on the hospital at regular intervals, which I subsequently did.

It is simply not possible to consider the CQC email, and my actions in the days that followed, as proof of “attempts to cover-up”. That is why I believe Jeremy Hunt’s tweet crosses a line. It is an unfounded attack on my integrity and I am not prepared to let it go.

Jeremy Hunt has received a legal letter from me asking him to provide direct evidence to back up his specific claim that I attempted to cover up failings at Basildon. It is on that sole question on which this whole debate now turns. It is no good Tories trying to distract attention by raising other allegations. He must answer the question I have asked.

I am conscious that rows like this turn people off politics and distract from the serious issues the NHS is facing. That is why I do not wish to prolong it for a moment longer than necessary. If Jeremy Hunt deletes the offending tweet and apologises, I will consider the matter closed.

But, if he fails to do that, I hope people will understand how I can’t leave such a serious, untrue claim unchallenged.