Since the NEC endorsed Ed Miliband’s big changes to the Labour Party lots has been written about what the reforms mean. Tomorrow the Special Conference debates them and hopefully gives them support.

More than 20 years have passed since John Smith succeeded in introducing the principle of One Member, One Vote. We select our parliamentary candidates through OMOV. But the way Labour elects its leaders has not kept pace with other changes in the party and in politics. Labour has continued with an electoral college system for choosing leaders which gives different weight to some votes and allows some people to have multiple votes. Now the time has come for leaders to be elected according to the principle of One Member, One Vote. The reforms will abolish the Electoral College and ensure everyone who wants a say is given an equal say.

Trade union affiliation levels will now be determined by all those who after a five year transition period make a positive choice for their union to pay affiliation fees on their behalf to the Labour Party. This is a big change and is one of the reasons for the phasing in of this process over a period of five years, ensuring financial stability and planning. A five-year transition phase will be essential in bedding down the reforms and the work of the Implementation Group established by the NEC will be crucial in overseeing all the details. 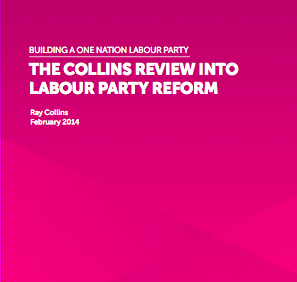 We’re introducing a new ‘affiliated supporter’ scheme open to all levy-paying members of affiliated trade unions who want to take an extra step, on top of agreeing to the payment of affiliation fees, to support the Labour Party. In return these individuals will be given the right to vote in Leadership elections. More importantly, and for the first time ever, these affiliated supporters will be attached to CLPs who will be able to contact them directly. So in future affiliated supporters may be invited to local meetings and encouraged to join community campaigns. Local Labour parties and trade union members will be better able to work together on issues of shared interest and concern which can only assist in building stronger links at local level.

Individuals who are not members of affiliated trade unions will also be able to register as Labour supporters and thereby secure the right to participate in Leadership elections. A registered supporter scheme has existed for some time now and there are several thousand such supporters. However, that scheme is being placed on a new footing and all current and future supporters will need to go through a process of registration requiring them to declare their support for Labour and pay an administration fee. None of the existing supporters will automatically receive any constitutional rights.

Furthermore, it is important to understand that no supporter will have the right to participate in local or parliamentary selections, or the right to represent the party, which will remain the preserve of full Labour members. Both supporter schemes will be administered by the party and in the case of affiliated supporters, with the assistance of trade unions.

Under the new system all affiliated supporters will be entitled to participate, for no extra cost. The run up to the General Election will be the most opportune time to encourage individual trade union members to become affiliated supporters. In the context of selecting a mayoral candidate by means of a primary, CLPs and affiliates will have a defined role in nominating possible candidates. Only candidates with a certain level of nominations, to be determined in advance by the NEC, should be eligible to be shortlisted. This process will ensure that CLPs and affiliates retain a special role in the selection.