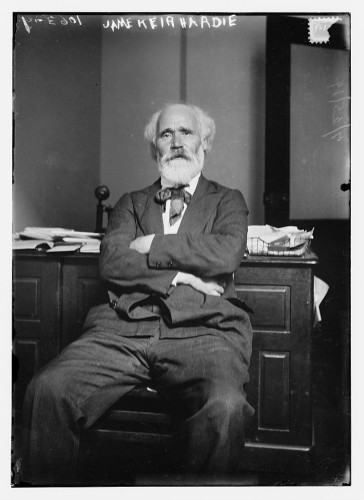 Keir Hardie was first elected to Parliament in 1895 and was integral to the founding of the Labour Representation Committee (later the Labour Party) in 1900, becoming its first leader in 1906. On April 11th 1914 – exactly one hundred years ago today – Hardie attended the twenty-first anniversary of the formation of the Independent Labour Party in Bradford. This was his address, reproduced on the internet for the first time:

I shall not weary you by repeating the tale of how public opinion has changed during those twenty-one years. But, as an example, I may recall the fact that in those days, and for many years thereafter, it was tenaciously upheld by the public authorities, here and elsewhere, that it was an offence against laws of nature and ruinous to the State for public authorities to provide food for starving children, or independent aid for the aged poor. Even safety regulations in mines and factories were taboo. They interfered with the ‘freedom of the individual’. As for such proposals as an eight-hour day, a minimum wage, the right to work, and municipal houses, any serious mention of such classed a man as a fool.

These cruel, heartless dogmas, backed up by quotations from Jeremy Bentham, Malthus, and Herbert Spencer, and by a bogus interpretation of Darwin’s theory of evolution, were accepted as part of the unalterable laws of nature, sacred and inviolable, and were maintained by statesmen, town councillors, ministers of the Gospel, and, strangest of all, by the bulk of Trade Union leaders. That was the political, social and religious element in which our Party saw the light. There was much bitter fighting in those days. Even municipal contests evoked the wildest passions.And if today there is a kindlier social atmosphere it is mainly because of twenty-one years’ work of the ILP.

Scientists are constantly revealing the hidden powers of nature. By the aid of the X-rays we can now see through rocks and stones; the discovery of radium has revealed a great force which is already healing disease and will one day drive machinery; Marconi, with his wireless system of telegraphy and now of telephony, enables us to speak and send messages for thousands of miles through space.

Another discoverer, through means of the same invisible medium, can blow up ships, arsenals, and forts at a distance of eight miles.

But though these powers and forces are only now being revealed, they have existed since before the foundation of the world. The scientists, by sympathetic study and laborious toil, have brought them within our ken. And so, in like manner, our Socialist propaganda is revealing hidden and hitherto undreamed of powers and forces in human nature.

Think of the thousands of men and women who, during the past twenty-one years, have toiled unceasingly for the good of the race. The results are already being seen on every hand, alike in legislation and administration. And who shall estimate or put a limit to the forces and powers which yet lie concealed in human nature?

Frozen and hemmed in by a cold, callous greed, the warming influence of Socialism is beginning to liberate them. We see it in the growing altruism of Trade Unionism. We see it, perhaps, most of all in the awakening of women. Who that has ever known woman as mother or wife has not felt the dormant powers which, under the emotions of life, or at the stern call of duty are even now momentarily revealed? And who is there who can even dimly forecast the powers that lie latent in the patient drudging woman, which a freer life would bring forth? Woman, even more than the working class, is the great unknown quantity of the race.

Already we see how their emergence into politics is affecting the prospects of men. Their agitation has produced a state of affairs in which even Radicals are afraid to give more votes to men, since they cannot do so without also enfranchising women. Henceforward we must march forward as comrades in the great struggle for human freedom.

The Independent Labour Party has pioneered progress in this country, is breaking down sex barriers and class barriers, is giving a lead to the great women’s movement as well as to the great working-class movement. We are here beginning the twenty-second year of our existence. The past twenty-one years have been years of continuous progress, but we are only at the beginning. The emancipation of the worker has still to be achieved and just as the ILP in the past has given a good, straight lead, so shall the ILP in the future, through good report and through ill, pursue the even tenor of its way, until the sunshine of Socialism and human freedom break forth upon our land.