The capacity of the Labour Party to go into headless chicken mode never fails to amaze me.

Reading recent press coverage you would assume it was us that had just come third in a national election for the first time in our history, lost 236 councillors and 11 councils and been beaten for the third year in a row in the local authority elections. Those are actually the results the Tories suffered, but their higher level of self-discipline means no one is commenting on the mess they are in, and people are having a pop at Ed Miliband’s despite the fact he just beat the Tories in both the Euro and local elections and we gained 324 councillors.

There also seems to be a time lag in people’s reactions to opinion polls. The narrative now is that Labour is losing its opinion poll lead. Except that is last month’s story. In May and early June we did see polls showing Labour’s lead dropping to 1% and in literally a handful of cases disappearing. But the most recent polls all show an increased Labour lead compared to a month ago:

So only one pollster shows our position deteriorating, whilst five pollsters show significant improvements in our position.

This is actually the first month for about a year when we have reversed a slow but steady erosion of our polling lead.

If we were being rational and reacting to the data we ought to be pleased that we seem to have turned a corner and regained momentum. This is almost unprecedented in the final twelve months of a parliament when a government usually recovers ground. And it looks like the improving economy is not making people happier with the government. There is nothing to be complacent about – it would be great if we were miles ahead – but objectively it looks like we have a chance to win a General Election when back in 2010 we were in meltdown and some people were questioning the party’s survival or suggesting we were headed for another 18 year period in opposition.

The naysayers will of course point to Ed’s personal ratings being awful. They are. But these are personal ratings obtained asking questions of the very same people who are giving Labour an increasing poll lead of up to 6%. I.e. they have already taken into account what they think of Ed and they are still planning on making him Prime Minister.

I would put the people who are fuelling the air of crisis into three categories:

1)    Commentators like Dan Hodges who have bet their reputation on Ed being a loser so they have a vested interest in helping fulfil their prediction by putting the boot into him.

2)    Plotters. A minority of the people who didn’t vote for Ed to be leader want the party’s decision revisited. Being charitable, they may have a different political vision and/or think another leader is more voter-friendly. Being uncharitable they may feel their careers will advance faster in an opposition led by someone else (maybe themselves?) than in a government led by Ed.

3)    Well-intentioned worriers. This third category definitely has the party’s best interests at heart but needs to realise that there are positive ways to suggest how we and Ed can up our game, and then there are headless chicken reactions that just make things worse.

All of these have the affect of generating a potential downward spiral of confidence for Ed. Only he can break free of it but it would help if others gave him the space to do so rather than making things worse with anonymous chatter to journalists.

For myself, my memory is long enough not to forget what Ed is capable of. I have not formed my impression of him based on the occasional goofy photo. That would be unfair – after all his leadership rival and brother was more than capable of goofy photo disasters, most notably featuring a banana.

My regard for Ed is based on years of seeing his power to inspire, seeing him pull off barnstorming and content-rich speeches at conferences before he was leader, something lots of people then express surprise about when he has hit the ball out of the park at two successive annual conferences.

It is based on the decency and warmth I have seen in him as a person, something quite rare in the cutthroat upper reaches of politics, which lead me to believe he will lead a wounded, divided and battered country with the compassion and humanity it desperately needs.

It is based on hearing him articulate a sophisticated analysis of the deep economic and social challenges the UK faces, and suggest imaginative policy solutions to them, which again is greeted with shock by people who first of all deride his ideas like the energy price freeze then end up trying to steal them.

It is based on seeing the resilience and toughness of a man who has been repeatedly underestimated and derided but usually has the last laugh because he keeps doggedly arguing for what he knows to be right and inspires people to follow him. I went through months of a leadership campaign in 2010 with know-it-alls claiming Ed could not win and I was wasting my time. He won then and he will show the same know-it-alls he can win next year’s General Election.

The leader I would compare Ed to isn’t Neil Kinnock as the press has been doing. Though incidentally I am sick to death of hearing that comparison being used as an insult. Neil Kinnock ought to be a hero for every Labour member. We wouldn’t have a Labour Party anymore if it wasn’t for his courage in taking on Militant and doing the policy heavy lifting that made the 1997 victory possible. He took a party that was almost dead in 1983 and brought it to within a whisker of victory in 1992.

“An empty taxi drew up outside 10 Downing Street and Clement Attlee got out of it.”

“A modest man with much to be modest about.”

“A sheep in sheep’s clothing”

All these were attributed to Churchill, who the underestimated Attlee thrashed in the 1945 General Election and went on to build the welfare state and the NHS. 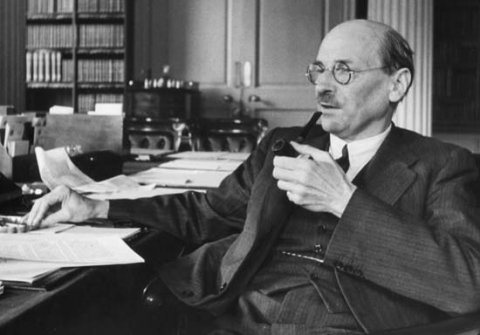 Attlee himself had the last laugh, writing the limerick:

“Few thought he was even a starter;
There were many who thought themselves smarter,
But he ended a PM
CH and OM
An Earl and a Knight of the Garter.”

Of course there was one thing Attlee did have and that was a really strong team of colleagues which he had to manage (most of them hated each other) – any one of Morrison, Bevan, Bevin, Dalton, Cripps was a political big-hitter.

It isn’t good enough for everyone to blame every up and down of Labour’s fortunes on Ed. He is the leader and that comes with the territory, but to win we need the senior team all shouldering the load with him and making an impression on the public. That’s how we won in 1945. That’s how we won in 1964 with Wilson backed up by charismatic senior colleagues like Jenkins, Callaghan and Healey. That’s how we won in 1997 when it wasn’t just Blair; Prescott, Cook and Brown were all serious players who looked ready for government.

The current team have the brains and political skills to be a winning team like that. But we need to see them coming forward, making the big announcements, making the big speeches, socking it to the Government in the Commons in a way that will convince them that Labour is ready to govern.

And the Labour team means all of us individual members in the country too and the conversations we have when canvassing and with family, friends, colleagues and on social media. We need to stop worrying about what the worst case might be in May 2015 and start ensuring that everything we say and do between now and then contributes to the best case happening.

This country needs a Labour government desperately right now. We have to have the self-confidence that we have got the right team, the right leader, the right policies and the right vision, if we are to expect the public to trust us with power.