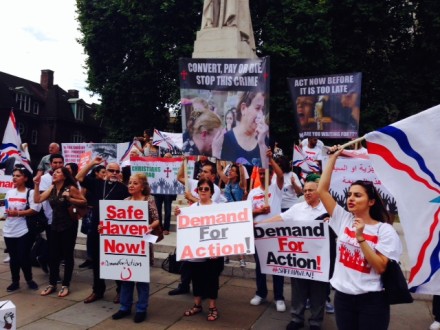 The Islamic State’s domestic invasion of Iraq poses a threat of historic proportions to the security of the region.

The IS have made it clear in their declarations and by their actions that they aim to establish a caliphate – a state ostensibly run under the principles of Sharia, Islamic law, and headed by a caliph, or successor to the Prophet Muhammad.

In this case, that self-anointed caliph is Abu Bakr al-Baghdadi. He’s already earned the title Specially Designated Global Terrorist under US Executive Order 13224.

He is now the man in charge of vast swathes of a country with which Britain went to war and whose modern state Britain under the leadership of Tony Blair, helped to create just over a decade ago.

The Islamic State is an emergent entity that combines the most malevolent aspects of a criminal gang, a terrorist organisation, and absolutist despotism. They are setting a new standard for brutality and mayhem: there is not a single principle of international, Iraqi or human rights law by which they abide.

However, the full scope of their destructive impact on the region is yet to be felt.

They have seized arms, military vehicles, and ordnance from the retreating Iraqi army, adding significantly to their firepower. Further, the more entrenched the IS are in Iraq, the more their capability for expansion grows.

The IS does not depend on foreign patronage to survive. They derive much of their wealth from within Iraq itself through extortion, looting, and oil smuggling. With the group now encircling Erbil and Baghdad, contemporary events could define the region for years to come.

The actions of Abu Bakr al-Baghdadi’s forces include forced conversion to Islam, rape, mass executions, allegedly selling of abducted women into slavery, the pillage of property, theft of belongings, the desecration of ancient buildings and the destruction of thousands of manuscripts and artefacts of invaluable significance to civilisation.

They are responsible for the forced expulsion of the Christians of Mosul and Nineveh Province – about 250,000 people. A further 200,000 people of the Yazidi community of Sinjar have literally had to run for their lives.

This year marks the 70th anniversary of  Raphael Lemkin Axis Rule in Occupied Europe: Laws of Occupation – Analysis of Government – Proposals for Redress. In it, Lemkin, a Polish lawyer first used the term “genocide” which he described as “the destruction of a nation or an ethnic group”.

“Genocide” is a word that shouldn’t be used lightly, but today, President Obama has approved limited air strikes to prevent it from happening.

It’s hard not to conclude that the murderous activities of IS constitute an act of genocide against the Assyrian, Chaldean and Syriac Christians and the Yazidis of Iraq according to Article 2 of the UN Convention on the Prevention and Punishment of the Crime of Genocide (1948) of which the United Kingdom is a party.

There are things we should have been doing weeks ago. Granting aid to those displaced by the Islamic State’s incursion, including, as an urgent concern, the airdropping of provisions for Yazidis stranded on Sinjar Mountain is an immediate priority.

The minorities of Iraq, who form a demographic majority in the Nineveh Plains region, have suffered disproportionately since the invasion of 2003. Their plight has been scarcely reported and no action has been taken either by the Iraqi state or internationally to support and protect them. Recent events are a savage illustration of that failure.

100 years ago, the hopes, fears and grievances of oppressed minorities across Europe burst into the open and pulled the west’s empires into bloody conflict. Now we see in the Middle East the same forces of domination with which it has been Britain’s duty to do battle for much of the last century.

At the very least, the UK should be using it’s influence with the Iraqi Government as well as the Iraqi Kurdistan Regional Government of Kurdistan to treat these ethnic groups as equal citizens of Iraq and afford them the protection and security provided to Arabs and Kurds.

Beyond humanitarian endeavours the UK government should assist the Iraqi state to exercise sovereignty over its borders. Conditions must be created for these indigenous inhabitants of Iraq to return to their homes and live a secure life free of persecution and violence.

The UK government played a leading role in helping the Kurds secure a safe haven in 1991. It was under the auspices of that safe haven that Iraqi Kurdistan was able to establish and develop itself. That precedent could be used to secure a safe haven for minorities, including Assyrian/Chaldean/Syriacs, Mandaeans, Shabaks, Turkomen, and Yazidis, so that they are not only safe from ethnic cleansing, but they can build a meaningful place for themselves in Iraq.

Around the world, momentous events are unfolding.

Last week we committed military assets to assist the evacuation of a country we were bombing three years ago. The UK is responsible for the events in Libya and Iraq. We created the conditions for the unfolding civil war in Libya and the political and territorial space filled by the fighters of IS in Iraq.

Time is of the essence. Immediate humanitarian relief and a commitment to a safe haven for Iraqi minorities should be our immediate goals.

The Prime Minister consulted Parliament on whether to intervene in Syria. We, probably rightly as it turns out, declined him his writ. But now – rather than unilaterally decreeing that Britain will not help, will not protect and will not act – he must ask Parliament again for its sovereign view. Because at stake are hundreds of thousands of lives now and Britain’s role in the world for decades to come.