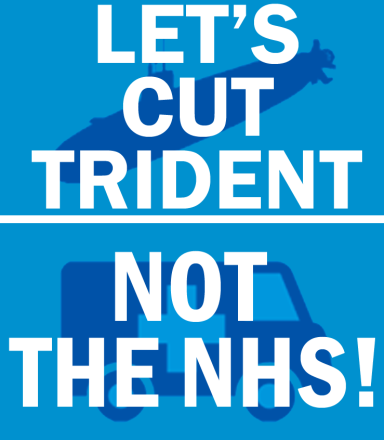 Whoever wins the election, the next Parliament will be asked to vote on building a new fleet of submarines to carry a new generation of nuclear weapons.

The warheads on these submarines, each of which could kill millions of people, are apparently ‘necessary’ for our security.

When Parliament voted to renew the Trident system in 2007, both front benches gave strong support but with over 150 Labour, Lib Dems and Nationalist MPs voting against. Since then the long-lead orders and pre-construction preparations for constructing the new submarines have cost us £3billion. If Parliament agrees to the plan we are likely to spend over £100billion on the system over the next 40 years. This is something all candidates must consider.

The original rationale for Britain possessing nuclear weapons was that they had ‘defeated’ Japan – despite evidence they were about to surrender – and since the US had them and the Soviet Union was developing them, that Britain should do the same.

Since then we have had the Polaris system, then Trident and now a another version is in the offing.

Clement Attlee, for all his huge domestic achievements, managed to have the H-bomb developed in secret, even from his own cabinet.

But since then there has always been a vigorous debate about nuclear weapons in the party and at times we have been committed to their abolition. It seems now we are once again avoiding a public discussion for fear of being seen as ‘weak’ on defence.

Our starting point must be that the world is committed to the elimination of nuclear weapons and that we, along with the other signatories to the Non-Proliferation Treaty, have agreed to take steps towards disarmament.

In yesterday’s policy seminar Vernon Coaker assured a sceptical audience that we needed the new Trident for our security. He did not specify what threat they were supposed to deter, under what circumstances they would be deployed and if he would do so. And there was no acknowledgement of our NPT disarmament commitment.

But while some in the party are avoiding the debate, the Sunday Politics poll of Labour PPC’s showed that with little support for Trident on the doorstep, a majority of candidates would scrap it.

Ed Balls seems set on freezing child benefit and continuing a level of austerity. Which part of austerity invokes this kind of spending, on something of no value to the poorest and unemployed people in Britain?

Faced with all the demands of health, housing, transport infrastructure, investment in manufacturing are we really going to commit all this money to such a project?

Given the economic circumstances, addressing the issue of Trident and employment is more important than ever. In a policy commission seminar this week the Unite representative on behalf of Barrow shipbuilders said he supported the party policy document and at the same time would support a defence diversification strategy – this is something we need an inclusive discussion on and the party must facilitate.

We are committed to a post-election Strategic Defence and Security Review; this one, unlike that of the coalition, will include nuclear weapons. We have to ask how nuclear weapons deal with any real issues of security.

The greatest insecurity in the world is poverty and inequality, victims of environmental change and endless wars of intervention. Thousands of desperate refugees of all these issues die in the Mediterranean and Atlantic every year trying to escape.

Britain having nuclear weapons will not help them, or anyone queuing at a food bank or job centre. The question we must ask is why we are so afraid of taking a courageous course of doing something to achieve a nuclear-free world, by not renewing Trident?

We have an opportunity to rid a ourselves of nuclear weapons. Let’s take it.

Jeremy Corbyn is the MP for Islington North