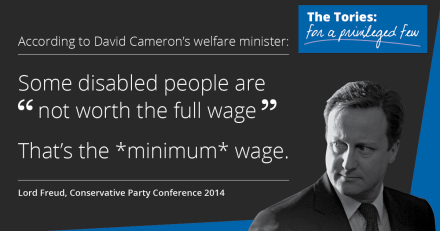 David Cameron’s welfare supremo has advocated treating those most in need differently by paying them below the national minimum wage.

Lord David Freud, speaking at a fringe event at  Conservative Party Conference, said he thought there was “a group” of disabled people who are “not worth the full wage”.

Lord Freud has exposed a face of the Conservative Party which sees the vulnerable as runners up, those in need as undeserving, and the minimum wage as applying just to a few of their choosing.

These views are outrageous.  They are nothing short of a disgrace which will offend people across our country. They have no place in modern Britain and should have no place in our politics. Simply, someone holding those views shouldn’t be in government.

You can hear the true face of David Cameron’s Conservatives for yourself here.

Compassion is dead in David Cameron’s Conservatives.  A government minister resurrecting such heartlessness shows that David Cameron cannot stand for the majority in Britain today.

Lord Freud joined David Cameron in opposition. David Cameron said at the time he was an ‘hugely impressive figure’, and then Freud has designed the Government’s welfare reforms. His record speaks for itself. He is apparently the Minister who came up with the idea of Bedroom Tax, and two thirds of the people hit by the tax are disabled.

Behind closed doors Ministers have been revealing their true colours, praising Margaret Thatcher, attacking health workers, and now attacking the most vulnerable.

David Cameron runs a government which stands up only for a privileged few. Five more years of David Cameron would mean working people left behind, futures forgotten about and opportunities removed.  Only Labour has a plan and the values that will deliver a better future for all.​

Michael Dugher is Labour’s shadow minister for the Cabinet Office

View all articles by Michael Dugher