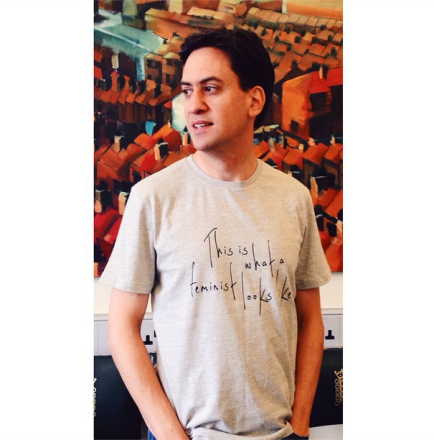 On Monday the news broke that David Cameron has repeatedly refused a request by Elle magazine to be photographed wearing a t-shirt. Why? Because on it, the t-shirt says “This is what a feminist looks like”. There have been a catalogue of ideas floated since about why he might not have done it – “It’s only a mag campaign” or “You shouldn’t dress up the Prime Minister”, say. But really, it’s not important that it was a request from a magazine, or that the slogan was emblazoned on a t-shirt. We’re talking about it because the Prime Minister of the UK was asked to publicly call himself a feminist, and he refused.

It’s not, obviously, about the t-shirt. If Cameron had been willing to say “I am a feminist”, then refusing to wear the t-shirt might just have made him look a bit of a bad sport. I’m sure his team would say it keeps him looking serious, or statesmanlike. But the Prime Minster offered Elle a quote in place of a picture, and he wouldn’t call himself a feminist there either.

It’s true that the word itself can be tricky. It has some grim connotations. Some of these are wilfully perpetuated by those who just don’t fancy feminism. For them, sharing power with women is still something to be afraid of. But there are others who have genuinely been taught that feminism just isn’t for them. The feminism they are told about is elitist, or divisive, or extreme – all clichés of body hair and burning underwear. And that’s on us to do a better job of explaining what feminism is, what it does, and why it’s good for us. But you know one of the only things that really helps with that? If influential people openly call themselves feminists.

It does matter that we own the word. It’s a label, but it’s the only label we have for everything to do with sorting out this mess. Every protest, every frustration, every contested low pay cheque, every win and everyone who speaks out about this is ‘feminist’. If we teach little girls – and little boys – that feminism is optional, that it is isn’t attractive or isn’t sensible or just ‘isn’t for them’, that will make a difference. Feminism means ‘equality for women and men’. Why would you ever take the risk of teaching someone that’s not something they should subscribe to?

Feminism needs to be the status quo. It needs to be so ordinary that it’s not even a question we ask anymore. Nick Clegg and Ed Miliband didn’t bat an eyelid at being asked to literally don that label. Of course they’re feminists. The question shouldn’t be “Dave, why didn’t you wear the t-shirt?”, but “Prime Minister, what help are you hoping to offer by not calling yourself a feminist? Which part exactly do you think people should be uncertain about?” Because it’s 2014, and I didn’t think it was much to expect that the UK Prime Minister be openly sold on feminism. So no, I’m not upset about a t-shirt. But as a twenty-something female voter, I am absolutely gutted about the rest of it.

View all articles by Grace Wright