Think back a few years. It’s 2009. Nick Clegg is handsome (yes, honestly, people thought that.) He’s honest (I know, I know, but they thought that too.) He will do it all differently, he will carry the beacon of truth through the corrupt stench of Westminster halls. (Stop laughing! People really thought that.)

They “agreed with Nick” they thought he would do it all differently. At one point, the LibDems surge into 2nd place in the polls.

There is nothing the media love more than ramping up an underdog. Once the snowball of underdog momentum teeters on the top of the Wapping hill, they nudge it and roll it, shove and push and run, laughing and whooping behind it until you might image there was no other news.

Of course, when it comes to it, whoops! Turns out that it wasn’t news at all! Turns out Clegg got fewer MPs than he had in 2005. Turns out, he actually polled a little less than he would have polled without the whole Cleggmania bubble.

With another election looming, we have the same phenomena, different year. Different and oh-so-unlikely hero. Nigel Farage is rarely away from our TV screens. In the most bizarre turn of events, he will have his very own programme chatting with the posh couple from Gogglebox. In a drunken haze of bonhomie and hail-fellow-well-met, Nige will sup his man-of-the-people pint, no doubt moan a bit about immigrants and enjoy an entire hour of exposure on prime time TV. Ed and Dave could only dream of such opportunities. 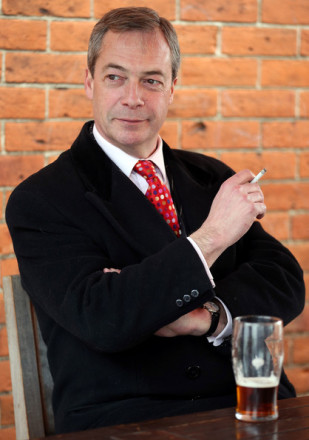 Caroline Lucas meanwhile, the actual MP elected for the Green Party, often polling similar numbers to Farage’s UKIP must watch tumbleweed roll past at the very mention of her name. Caroline who? Oh yes, the Green woman. Farage has appeared on Question time 14 times, more than any other politician. Lucas almost half as often at 8 times.

I’m sure we’ll get a few hilarious shots of Boris Johnson suspended from some kind of hilarious tree, bridge or zip wire. No message needed. “I’m a buffoon, buffoons aren’t even a bit scary or machiavellian. Look, I can barely keep my own trousers around my waist, how could I possibly act like a git the moment I get near Westminster?.

There will absolutely definitely be a sex scandal. Some hapless MP, in a moment of ego fuelled boredom, will be entrapped into sending a picture of his willy to some journalist, or worse, caught with his trousers actually down on Hampstead Heath or in a variety of S&M outfits that have us laughing for several elections to come. We won’t stop to think that actually, does it have any bearing whatsoever on whether he can do his job? Could we care even the tiniest bit where he puts his willy if he is good at his job? Apparently yes. He’ll be gone before a full round of the 12 days of Xmas.

Ed Miliband will be humiliated every time he dares to poke his slightly sinusy nose outside of his front door, Won’t matter if he eats a bacon sandwich, doesn’t eat a bacon sandwich, gives money to street sleepers, doesn’t give money to street sleepers, doesn’t give money quite kindly enough to street sleepers, you won’t hear a single policy, a single word he actually tries to say. For the next 6 months, he will be cast in the role of Ed the geek, Ed the incapable, Ed the un-Prime-Ministerial. If he makes a speech, the media will pick the one moment he scratched his nose, or blinked too long or god forbid, scratched his bottom and weeks of speech writing, months of policy development will be made irrelevant “Ed Scratches Arse, the Arse” so much better than any real substance.

So, we have the extremely posh Farage cast as working class hero racing to save the day, pint in hand, Cameron the old-Etonian baddy, with cries of “Oh yes he is, Oh no he isn’t” ringing out every time he or Osborne skulk onto the screen in shadows of evil, Ed the geek, laughable, incapable and somehow unable to say anything at all anyone might ever get to hear. Clegg, well, he’s been torn down from his pedestal so absolutely, no-one’s sure when they last saw him, or even if he’s still in the job. Caroline, thingummy, working hard, waaaaay too earnest and greeny occasionally mentioned as a kind of afterthought by a journalist so new to the game, he hasn’t quite grasped the rules yet.

Is it any wonder our voters couldn’t give even the tiniest monkey’s about the election? Any wonder they think the whole shower are utterly incapable of governing, that whoever they choose, nothing will change. Is it any wonder UKIP were polling over 12% even when they hadn’t announced a single policy? Is it any wonder Ed Miliband is seen as un-Prime-Ministerial when every image we’ve ever seen of him makes him look so? Is it any wonder Iain Duncan-Smith can say one thing, then do exactly the opposite and no-one so much as questions his lies?

The media decide who we like, who we will vote for, who we respect, who we fondly tolerate and who we hear. They have decided that Farage is the man of the moment and accordingly, his polling surges daily. After all. The right wing press have been fed up with the metro-elite Cameron et al for years. Nigel is just what they really want. It’s as though the Daily Mail cloned him from some Enoch Powell DNA and a benevolent 50s Tory. They have created what they believe is the perfect right winger and will ensure he gets maximum coverage accordingly.

Herded through ever narrower sheep pens, we the public will baa and our baas will sound increasingly like “faraaaage” “faraaaaaaaaaaage” and we will hate immigrants and agree that floods may have been caused by too many gays and that breastfeeding in public should be done “sensitively and discreetly” and congratulate ourselves on choosing such a fresh outspoken candidate.

Meanwhile, Murdoch and the Daily Mail will be laughing all the way to the right wing coalition. Nice work my fellow sheep. Your lives will get better by the day……oh wait…..