During a episode of Gogglebox on Channel 4, Nigel Farage claimed he was the really poor:

“I don’t think I know anyone in politics who is as poor as we [Nigel Farage and his wife] are. We live in a small semi-detached cottage in the country, and I can barely afford to live there. We don’t drive flash cars. We don’t have expensive holidays. We haven’t done for ten years.”

As we reported at the time, Farage’s claims about being oh so poor don’t really add up:

Courtesy of Ukip Farage is driven around in a car which costs £60,000 a year, and the party also pays for of a team of bodyguards who accompany him around the country. Meanwhile, his wife Kirsten Farage who was formerly paid £27,000 a year to be her husband’s secretary is now employed by UKIP MEP Ray Finch and is reportedly earning more than £30,000 a year.

The money doesn’t stop rolling in here. Through media appearance and lectures in 2012/12013 The Times (£)have reported that a personal service company – which Farage channels money through – made a profit of £45,488.

Farage’s past is also littered with bank notes. He had shares in trading firm, Farage Limited, that his brother earned £696,000 in dividends – after Farage has set up a trust on the Isle of Man to reduce the inheritance tax bill his children may face. Not exactly the actions of a poor man.”

Yet where was Nigel Farage today? Outside the millionaire’s bank Coutts: 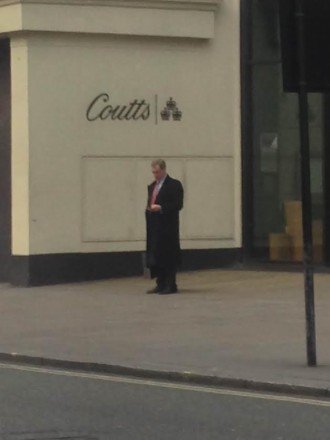 Probably just waiting for a bus…right?