David Cameron does not want the Green Party to be involved in the leaders’ debates through any high-minded notion of democracy or fairness. He said it because he wants to block the debates, and if he really has to take part, he hopes the inclusion of the Greens will hurt Labour.

But as Mark Ferguson argued in October, Natalie Bennett’s presence could in fact help Miliband – I’m not so sure, but as an underwhelming media performer, she might not do the kind of damage Cameron expects.

The Prime Minister’s first public intervention into the TV debate came on the back of broadcasting regulator Ofcom’s ruling that the Green Party do not qualify as a major political party. This has caused some consternation, not least with the Greens, who damn the decision “for the damage it risks doing to British democracy.” Er, sure. 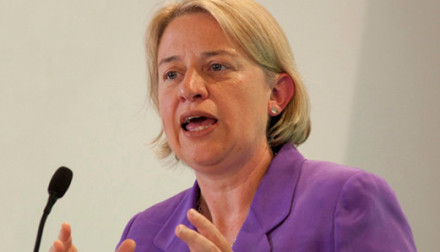 Many are unhappy with the ruling because a) UKIP have been deemed a major party, and b) it makes it less likely that Bennett is included in any televised leaders’ debates.

Putting aside who should and should not be in the debates (there’s a decent argument that it should be a straight Miliband v Cameron affair anyway), it is quite clear that Ofcom are correct. By any reasonable marker, the Greens are not a major party. I am not privy to all of Ofcom’s considerations, but I would argue that a major party would have to perform well in at least one of the following areas:

With their single MP, the Greens fall short here. With a lowly two, so do UKIP. The Liberal Democrats, with just shy of 60, perform rather better. When you consider that their MPs make up a large proportion of the UK Government, their parliamentary representation starts to look rather good.

While the Green vote has undoubtedly risen over the past four years, and a little more sharply over the course of 2014, they are still not on course for a particularly impressive voteshare in 2015. The Lib Dem, for all is made of their utterly woeful polling, have never fallen below the Greens’ support in poll of polls aggregators (as above). While occasional polls have given the Green Party a lead over the Lib Dems of one or two points, all other polling would suggest they are outliers. Of the last 77 UK polls, the Lib Dems have topped the Greens in 64.

UKIP, on the other hand, have polled well since they first overtook the Lib Dems in early 2013. They are showing a strong and consistent polling average.

The Green Party have won one MP, ever. They have only ever run one council. Their best performance is to have once finished third in a national election: the European elections in 1989.

UKIP have never yet performed well in general elections, but the fact that they have topped a national election in the last year suggests that they should at least be considered.

The Lib Dems have made a strong showing, in terms of both seats and votes, in every general election since 1997. While they have been massacred in both locals and Euros over the past few years, recent history tells us they are a major political force when it comes to general election time. This may no longer be true come May this year, but it is right now.

So, while UKIP and the Lib Dems don’t meet all the criteria, they do at least meet some of it. But I have seen nothing yet to suggest that there is anything “major” about the Green Party.