I am not one of those who claims this is a boring election. While the current Labour Party may not be exactly as I would want it to be, I am not someone pining for a “big” offer, which can usually be translated as “expensive”.

No, I think it is an exciting election, between two parties who have very different visions for the country and offers for the electorate. That they are currently polling so similarly, and the increased popularity of several smaller parties, makes it even more exciting through its unpredictability, no matter what some commentators may say.

I am not even among those who want PMQs to be scrapped – or worse, reformed. The weekly slanging matches may be unbecoming, but that is largely because the two leaders are not very good at it, rather than a problem with the format. You only need to see an MP take questions from an audience of the public to see that they are by no means exceptions in their poor behaviour. If you don’t believe me, try watching Question Time. It’s even worse than PMQs.

Presumably people who want to reform PMQs would like to see something akin to the Ask The Chancellors programme on Sky News earlier.

The format was a disappointing halfway house that fell short of a proper debate. George Osborne and Ed Balls were asked questions by a studio audience, but each had their own half hour section and did not appear on screen together. 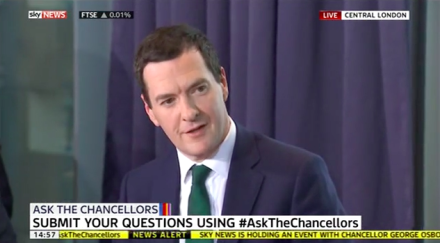 This televised non-debate seems to have been a triumph of Conservative efforts to ensure David Cameron dodges proper debates, and is a precursor to what we can expect when Cameron and Miliband go not-head-to-head at 9pm on Thursday.

It was a turgid, drab affair. The best thing that could be said was that neither man resorted to his party’s election slogans.

Half an hour is not long enough to cover a range of issues in a great deal of depth. To make sure a selection of topics are heard, you need to keep follow up questions to a minimum. This means the politician knows that when they are on shaky ground they can obfuscate, ramble, or change the question to one they actually want to answer with relative safety – chances are, the next question will be about something completely different.

This was most obviously exploited by Osborne, who responded to a question about the need to build more houses with an answer about planning and Help to Buy. 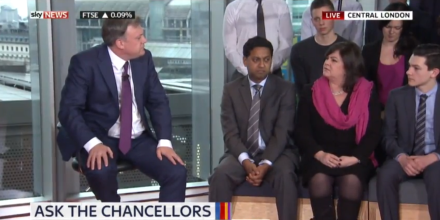 There were a few occasions when they were taken to task with repeated questioning, and they supplied the best moments. Osborne was taken to task over his reluctance to do anything about the exploitation of workers through zero hour contracts (despite accepting the exploitation did exist) and Balls over the perceived timidity of his deficit reduction plan.

However, it does not supply much confidence that when Jeremy Paxman and Kay Burley grill Cameron and Miliband on Thursday evening it will be as useful to voters as an actual debate.

The only moment worth watching at all was one of unintended joy. Osborne’s final answer overran, and needing to keep their sponsors happy, Sky had to cut away from the Chancellor mid-sentence as he talked about corporations not paying their tax to an advert for payday loans: