Join LabourList for a half day conference covering what to expect during the short campaign and from a Labour government. Sessions will cover Labour’s election campaign, Labour’s governing priorities and which ‘rising stars’ to watch out for in the Labour Party.

Speakers include: Chuka Umunna (Shadow Business Secretary), Caroline Flint (Shadow Secretary of State for Energy and Climate Change) and Douglas Alexander (Shadow Foreign Secretary and Chair of Labour’s General Election Strategy). You can see the schedule in full below.

Tickets are priced at £100, or £50 for attendees from the charitable/voluntary sector. You can buy tickets here. 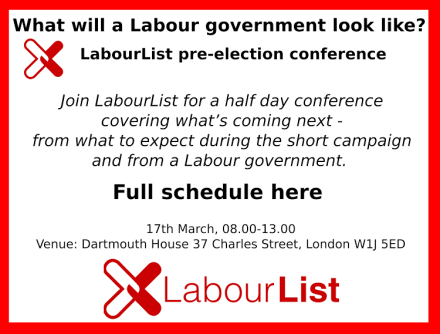 8:15­- 9:00 The next economy  Chuka Umunna MP Shadow Business Secretary in conversation with Stefan Stern columnist for the Financial Times and contributing editor of LabourList

9:40­-10:20 The next government: Directory of who to watch Covering who are the rising stars in the Labour Party with:

● Polly Toynbee, columnist for The Guardian

11:00-­12:00 The next transport policies: What would transport look like under a Labour government?

● CHAIR: Stefan Stern columnist for the Financial Times and contributing editor of LabourList