It really hasn’t been the best week for David Cameron, one that he’d most likely rather forget. But since we’re in the middle of a general election campaign, it was always unlikely the opposition would let him get away with doing that.

To commemorate Cameron’s week, the Labour party have produced a round-up for him (and anyone else who might have missed some of the highlights) here. 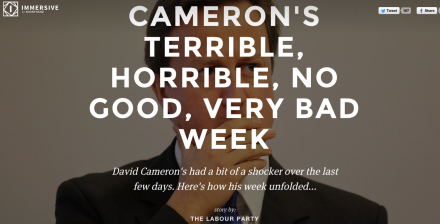 It includes gaffes like the ‘accidental retirement’ announcement he made in his kitchen on Monday, the PM getting heckled by people at an Age UK rally on the NHS, his involvement in the plot to rush through a change to the rules electing Speaker of the house (which prompted upset from a number of backbench Tory MPs, in particular from Charles Walker MP)  and his less than impressive performance on the so-called TV debates.

Let’s see what next week has in store for him…