The budget is out of the way, and Labour’s general election campaign is now properly underway. How do we know? The party’s first election poster has been unveiled by Ed Balls and Andy Burnham today in Harlow, one of the party’s target seats, and it’s the NHS and cuts. Here it is: 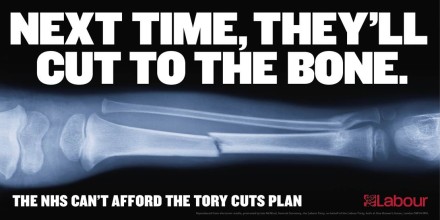 The poster was designed by Trevor Beattie – the advertising guru who helped run party ad campaigns in 2001 and 2005. The purpose is to build on Labour’s attacks on Tory health spending plans following this week’s budget – which is why Balls’s key attack line is “Our NHS just can’t afford these extreme and risky Tory cuts”.