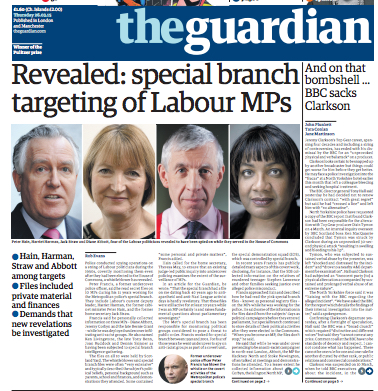 There’s a deeply depressing, alarming but (unfortunately) not especially surprising story on the front page of the Guardian this morning:

“Police conducted spying operations on a string of Labour politicians during the 1990s, covertly monitoring them even after they had been elected to the House of Commons, a whistleblower has revealed.

Francis said he personally collected information on three MPs – Diane Abbott, Jeremy Corbyn and the late Bernie Grant – while he was deployed undercover infiltrating anti-racist groups. He also named Ken Livingstone, the late Tony Benn, Joan Ruddock and Dennis Skinner as having been subjected to special branch intelligence-gathering. The files on all 10 were held by Scotland Yard.

The whistleblower said special branch files were often “very extensive” and typically described the subject’s political beliefs, personal background such as parents, school and finances, and demonstrations they attended. Some contained “some personal and private matters”, Francis added.”

Peter Hain has called for an existing judge-led public inquiry into undercover policing examines the surveillance of MPs – and he’s right. Because we need to know how widespread this was, who knew about it – and who instigated it.