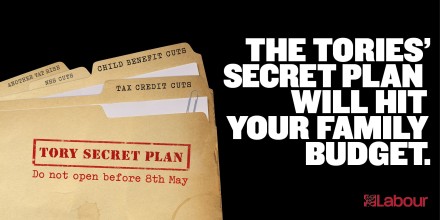 Today Danny Alexander -who will almost certainly lose his seat next week – has confirmed that the Tories have drawn up such a plan, and leaked it to the Guardian. The proposals included:

To be clear, all of this would only cut £8 billion from the benefits bill (the Tories have pledged to cut £12 billion), and all of this would hit family finances. Already Tory Ministers have been repeatedly attacked in interviews for failing to explain where that money would come from. Michael Gove explicitly refused to rule out child benefit cuts – as did David Cameron with tax credits.

Still, it’s rare that when a party accuses a party of hiding a secret plan to do something bad, that someone pops up just a few hours later to confirm it. This will place David Cameron in a very difficult position on Question Time tonight. Despite his denials, he’s singularly failed to explain where these cuts will come from. Tonight he has his chance…

(Incidentally, there are many reasons why Danny Alexander might have done this. It may be an attempt to prove that the Lib Dems constrained the Tories (which few believe), it may be an attempt to change how he is remembered by history as he falls out of office – or it may be an olive branch to a Labour Party that doesn’t seem all that keen on working with the Lib Dems. After all, although Alexander has been a Tory henchman for five years, he has many friends in the Labour Party from his time at Britain in Europe. Regardless of motives though – I’m glad he released these details. I just wish he’d been more upfront about the people he was working with years ago…)