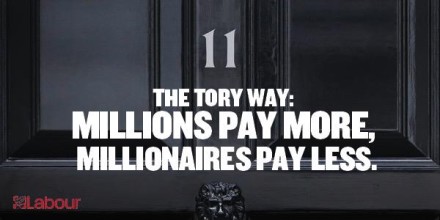 Ed Balls today launched Labour’s latest election poster with a speech near his constituency in Leeds. The poster features a picture of 11 Downing St, traditionally the residence of the Chancellor of the Exchequer, with the words “The Tory Way: Millions pay more, millionaires pay less” over the top.

This follows a poster released two weeks ago, hitting the Tories’ over the record on raising VAT – which forced Cameron to rule out increasing the tax again.

Here’s what the Shadow Chancellor said about Labour’s plan:

“It’s all part of our plan to back working families who are struggling after five years when bills have risen faster than wages:

Expanding free childcare for all working parents of three and four year olds to 25 hours a week; Increasing the minimum wage faster than earnings – rising to £8 an hour before 2020; Giving tax breaks to firms who start paying the living wage; Banning exploitative zero-hour contracts and ensuring that workers who work regular hours get a regular contract;Freezing energy prices so bills can fall but not rise and giving the energy regulator tougher powers so that when wholesale costs fall, bills for families and pensioners fall too; And backing first-time buyers and dealing with our housing crisis by getting at least 200,000 new homes built a year, as Ed Miliband set out on Saturday.

A better and fairer plan for millions, not just millionaires.

Because Labour knows what when working people succeed Britain succeeds too.”