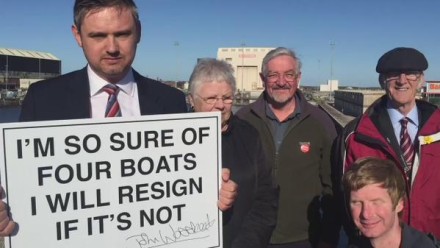 John Woodcock, who is standing for re-election in Barrow and Furness, has pledged that he will resign from Parliament if Labour fail to build four successor submarines for Trident.

As the constituency he has represented since 2010 has a shipyard where Trident subs are built, it is a big election topic in the area, with many jobs potentially on the line.

Earlier this month, Tory Defence Secretary Michael Fallon accused Ed Miliband of being willing to “barter” away the UK’s nuclear deterrent system – despite the Labour leader making clear that he supports renewal.

“We know that people have been worried about the lies the Tories have been saying about the shipyard.

“So I’m making clear today that I am so confident of a future Labour Government building four boats here in Barrow, that I’m saying I’d resign if that didn’t happen. Now it’s an easy pledge for me to make, because we will build four.”

My pledge: am so confident Labour will build four Trident successor submarines that I will resign as MP if we don’t pic.twitter.com/XRBu9LYTCh

Woodcock has previously challenged Russell Brand, the anti-Trident comedian and activist, to debate the issue in Barrow.