Before the Labour leader took to the stage, we already knew that the first page of this novella-length document was a break from the norm. Instead of outlining the party’s vision for the future, they decided to stress their “budgetary responsibility lock”, which guarantees everything in the manifesto is fully funded. This set the tone of the manifesto and delivers a clear message to the electorate: Labour are fiscally responsible

The front page of the manifesto is styled in a similarly straightforward manner. Labour have ditched the illustrations they went for in 2010 and have rightly steered away imitating the Labour manifestos of ’97 and ’01, which had then-leader Tony Blair’s picture printed on them. Instead, they’ve gone for all text, which is in the bold One National Labour colour against an austere white backdrop. 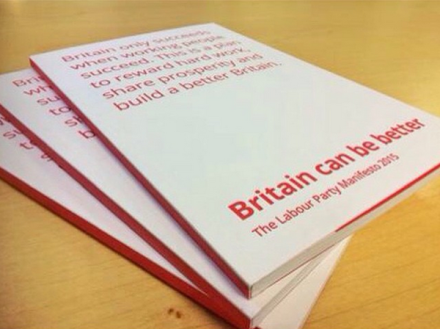 Now for the policy nitty gritty. They say don’t judge a book by it’s cover, but in this case it may be accurate. Much like the manifesto’s front, Labour haven’t used this opportunity to make many shiny new announcements . Since it’s been a fixed-term parliament – meaning the opposition already knew when the election would be – we’ve been drip fed policies for quite some time now.

However, we’ve had a look through and here’s what we’ve found so far that’s new: