Ed Miliband was in fine form for Labour’s manifesto launch in Manchester this morning. His delivery was soaring, as was his confidence.

The speech was better too – owing not just to the policies unveiled today, but the language of the manifesto too. It may have a dry name, a downbeat front page and a “lock” for a first page, but this is a manifesto with a bit of heart, which tells a story about a different kind of Britain to the one we live in today – distant both from the last Labour government and the current coalition variety.

And the manifesto hangs together more coherently as a plan for the country – to coin a phrase – meaning that the whole is bigger than the sometimes technocratic looking policies have appeared when announced individually. As Miliband rattled through Labour’s (costed) proposals, they sounded more like a coherent to-do list for changing Britain than a shopping list of goodies. 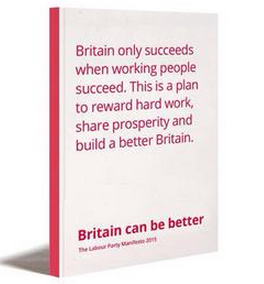 Is this manifesto as good as it could have been? Well I’d like to have seen a more ambitious target on the minimum wage (a long term target for eliminating poverty pay, for example) but the £8 per hour target coming forward a year was welcome. I’d also have liked (hobby horse alert) to see a bigger commitment on home building – but the new future homes fund is a sizeable step in the right direction, and housing is now clearly on the party’s agenda once again.

But what’s most interesting about the document (after an initial read of the 84 pages) is that it borrows a great deal of the language (and at times the politics) of “Blue Labour”. Community, work and home run through the manifesto like a stick of rock.

What’s interesting though is that this isn’t an entirely Blue Labour manifesto. Nowhere near – after all, despite the increase in its influence in recent years, it’s far from the dominant school of thought in the party. This document might be best described as existing where Blue Labour meets “(Gordon) Brown Labour”. After all, the protection of tax credits – that emblem of Brown’s time in office – was one of the key announcements today.

But what the manifesto has done is code within the party’s DNA some hard-won but significant changes of policy direction that it would be hard for Miliband – or any future Labour leader – to turn away from. Not just fiscal responsibility (it’s hard to imagine any short or medium term scenario in which the Labour Party make the sort of funny money spending commitments that the Tories have spent the weekend doing) but the renewed “blue” focus on devolution is stark. At one point the manifesto says:

“Our governing mission is to break out of the traditional top-down, Westminster knows best approach, and devolve power and decision making to people and local places”.

It’s hard to imagine that kind of language in a similar document from the centralising New Labour years. Likewise, the way Labour talks about power appears to have changed if this phrase is true:

“Labour believes meaningful and lasting change for the better is only possible when people are given the power to change things for themselves.”

These sentences – both that they exist in the final document, and that they no longer ‘frighten the horses’ within the party – are a testament both to the party’s policy co-ordinator Jon Cruddas and his ideological soul-mate Jonathan Rutherford (one of the primary authors and architects of the manifesto along with Miliband’s speechwriter Marc Stears, and policy chief Torsten Henricson-Bell). They’ve put in the hard yards to achieve some (perhaps limited, but real) cultural change within the party. NPF Chair Angela Eagle also deserves a tip of the hat too – as it was her assured steering of the National Policy Forum process that has helped new ideas to develop, without being stifled by the party’s all too familiar acrimony. And Miliband deserves praise too for allowing different kinds of ideas to work their way into the manifesto, without forcing the document to wear too tight an ideological straightjacket.

Does that mean at times that Labour’s manifesto reflects the differing priorities and methods of some of its key protagonists? Perhaps. But that is probably a fair reflection of where the party stands at the moment, and where Miliband himself stands. Not willing to forego some of the old tried and tested methods, but knowing that a radical, devolved and fundamentally different model is slowly emerging. Standing on the threshold of something new without leaving all of the old ways behind.

That ensures that whatever the result on May 7th, ideas in this document will live on within the party. So pick up a copy if you can. I don’t say this lightly or often, but this manifesto is a good read.