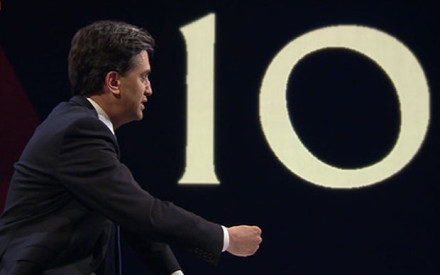 Ed Miliband is now the favourite to become Prime Minister, according to bookmakers. Ladbrokes now make the Labour leader odds on to be the politician walking into Downing St after May’s election. They say the odds for Miliband to be PM on July 1st are 5/6, while Cameron comes in at evens. Nigel Farage is a long shot at 100/1, while Nick Clegg is even further out at 200-1.

The recalculation comes after last night’s TV debate, which Miliband was judged to have won – and which Cameron did not attend.

The Tories, however, are still considered favourite to win the most seats – but the bookies reckon Miliband has a better chance of winning support from a majority MPs and a Labour minority government is the likeliest outcome at 13/8.

In Sheffield Hallam, Nick Clegg is slight favourite to hold on, but the odds show it being a close battle between the Lib Dem leader and Labour’s Oliver Coppard.

UPDATE: It’s not just the betting shops who have changed their minds – former ConservativeHome editor Tim Montgomerie says “eggheads” have too:

Three eggheads who have been promising me that Cameron would stay as PM are now expecting Miliband to be in Number 10. A lot at stake folks.