The past couple of weeks we’ve seen a deluge of polls, and some are more interesting than others. Two particularly interesting pieces of polling cropped up over the past week. At the weekend a leaked poll showed that South Thanet – where UKIP leader Nigel Farage is standing to be an MP – is a three way race between Labour, the Tories and UKIP. This seat was originally thought to be a battleground between the two right-wing parties, but with consistent campaigning Labour’s candidate Will Scobie is making good ground.

Meanwhile, over in Sheffield Hallam, an Ashcroft poll showed Labour ahead of Lib Dem candidate (and leader of the party) Nick Clegg. This is the third poll in recent months to show this, and could mean that Labour’s Oliver Coppard unseats the Deputy PM in May.

Although it’s safe to assume most Labour supporters would like to see the party win both seats, we wanted to know if Labour could only beat one of these party leaders, which you would choose.

At 58% the number of people who want Nigel Farage to lose in South Thanet is just a little higher that Nick Clegg in Sheffield Hallam, who got 42% of the vote.

This could be for many reasons, perhaps because Farage represents a more toxic brand of the right. Meanwhile, when it comes to Clegg there’s a good chance that even if he wins in May, he could be forced to out of politics anyway.

But as these results suggests, LabourList readers seem keen for both leaders to go…

Every four weeks we ask LabourList readers to rate the Shadow Cabinet, to see how they think each member of Labour’s top team are faring.

The rankings this time round seem to reflect a general trend that’s been consolidated in recent months, where Andy Burnham Shadow Health Secretary sits at the top of the table with an average ranking of 4.08.

Behind him, is a pack of shadow ministers who are all on roughly the same scores – the likes of Yvette Cooper  (who is in second place) on 3.62, Chuka Umunna on 3.51 and Harriet Harman on 3.4. 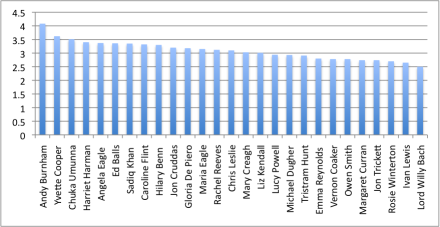 There’s no big changes from the last time we asked this question, particularly as most of the Shadow Cabinet – apart from front runner Andy Burnham – tend to get, on average, a similar score.

The usual suspects are at the other end of the scale but as we’ve written before this is probably due to the fact that many of these are among the least well known in this group.

801 voted in this week’s survey. Thank you to everyone who took part.