I haven’t bought the argument there is a mass entryism problem afflicting Labour’s leadership election.

Entryism means an organised attempt to enter into and take over a bigger, more popular political party.

The Leninist micro-sects that have encouraged their members to join to vote Corbyn, or the Tories doing it as a joke, are too small in number to have any impact on the outcome.

Where Greens or TUSC members are signing up they are clearly doing so against not under the instructions of their parties as in both cases it isn’t in their electoral interest for Labour to move left and operate in the very narrow space they are in. 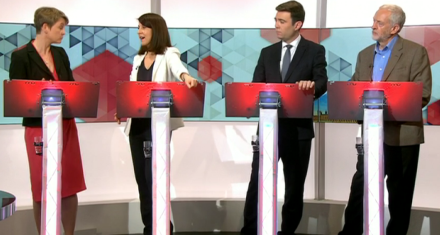 Where anyone believes that someone who is a member of another party is joining they just need to inform Labour Party HQ – straightforward procedures are in place and are being used to block people from voting if there is evidence they are not Labour – I’ve seen one person post online the rejection letter that reminds them they were expelled 13 years ago for standing against Labour in a council election.

Whilst it’s frustrating to see the Stop the War Campaign or other single issue groups promote signing up to vote Corbyn, it’s not improper. The system agreed by the Collins Review was deliberately set up to allow this kind of mass recruitment of registered supporters. Ironically, it was a sop to the Blairite right, who wanted primaries. I think that is called being hoist by your own petard. If Labour moderates haven’t recruited as many people as Corbyn we only have ourselves to blame.

So where is Corbyn’s support coming from?

A large slice of it has always been there – the infrastructure of the Labour left is well-developed and has proved surprisingly resilient and capable of winning internal party elections during the Blair and Brown years. Some of it such as the misnamed Campaign for Labour Party Democracy dates back to the 1970s and the growth of Bennism, other allied but also rival groups such as the Labour Representation Committee are more recent constructions. They have mailing lists, conferences, key contacts in almost every CLP used to proposing candidates in nomination meetings. Most of this ageing but experienced and highly motivated machine has swung into place behind the Corbyn machine. Not all though – a small number of key people who would usually be involved seem to have their qualms about whether Corbyn is actually a potential PM and have quietly stayed away. The Labour left has its own internal rivalries and hatreds but is good at keeping them behind closed doors.

These established Hard Left networks have mass support in the ranks of inactive members, as well as cadres who often hold key positions as CLP or branch secretaries. They have their own mailing lists assembled over years, and their NEC candidates hold extremely potent email lists assiduously collected at speaker meetings – one boasts of being able to email 20,000 members. The potency of and disciplined vote for the Grassroots Alliance slate is regularly demonstrated in NEC elections. Last summer the left took 4 of 6 NEC slots with all 6 of their candidates getting over 21000 votes, and Ken Livingstone getting nearly 40,000. I would have thought 95% of the core 21000 and many of the other additional 19000 who backed Ken will be Corbyn voters.

The second component is Affiliated Supporters. Basically Unite is what matters here. The other unions backing Corbyn are small craft unions like the bakers and train drivers who are vocal but not big battalions. The other big unions – GMB and Unison – do not appear to be deploying a machine for Corbyn – one may not nominate and the other may back Burnham. But Unite has followed through on the logic of its policy positions and its much-leaked national political strategy and on the spirit of the Collins Review which assumed unions would enthusiastically recruit members to vote, and has signed up large numbers. I think their claim to have signed up 50,000 affiliated supporters is credible based on local sign-ups I see as Membership Secretary in my own CLP. If last time’s impact of the union nomination on voting behaviour is anything to go by, that means another 25,000 votes for Corbyn.

Finally there is an influx of new blood into the party. The bulk of this isn’t £3 registered supporters, of which I’ve seen a figure of 20,000 people mentioned. Most of them are about 80,000 new full members out of 260,000 who joined in April, May and June in a smaller wave inspired by Ed in the election campaign and a bigger wave motivated by trauma, anger and despair after the election defeat. In the long run these new members will be a massive asset to Labour’s renewal. In the short term they are powering Corbyn’s support. The majority weren’t brought in by Corbyn, they joined before he announced he was running. But his message of hope and easy solutions has potent appeal to young, idealistic new members, despairing at how to confront Tory cuts. The message from the other three candidates – that we need to compromise with an electorate that saw Ed Miliband and 2015 Labour as profligate spendthrifts who were soft on immigration and would ruin the economy has the virtue of being completely true. Sadly it gets trumped by a straight-talking uncompromising leftie saying you don’t have to compromise with the existing voters, you can inspire an imaginary army of previous non-voters (which no evidence suggests exist in the sense of being open to being inspired by Corbynism) by just shouting what you believe yourself more vigorously. The comparison I would make isn’t with the entryism of the 1980s, it’s with the hordes of anti-Vietnam War young people who signed up to help George McGovern become the Democratic presidential nominee in 1972.

Just as the unworldly idealist McGovern and his hippies were thrashed by the cynical conservatism of Nixon – who proclaimed correctly that he would win because the average American was not young, was not poor and was not black – so Corbyn and his hipster idealists organised by cynical factional hacks would be cruelly destroyed by Lynton Crosby if they are the Labour brand in 2020. McGovern won just Massachusetts and DC. Corbyn would do a bit better due to our smaller constituencies, but not a lot – he has pretty much maxed out the market for his type of politics in this internal election, there just isn’t a wider set of British voters who want it. Think 1983, move several notches to the left as Corbyn is way to the left of Foot, and then factor in 30 years of massive demographic changes that have all reduced the base of support for leftwing policies.

I’ve been accused of being patronising by some of the new idealistic members. Sorry but it is difficult not to be when confronted by naïvety, lack of any campaigning experience, sheer made-up cloud cuckoo land economics and political analysis that I grew out of at about the same stage in 1983, when aged 11, I looked at all the Tory posters in windows on our housing association estate, and first read the 1983 election results and realised Labour under my beloved Foot and Benn was really incredibly unpopular with normal working class people.

If I’m being patronising its because I don’t want this beautiful new intake of inspired, enthusiastic young members to have their idealism smashed to pieces by another two Tory victories like we had to go through in 1987 and 1992, while the people we are all Labour members to help see their incomes fall, their communities decay and their public services destroyed.

I don’t want them to have to learn their politics like Bill and Hilary Clinton did in the McGovern campaign in 1972, working their hearts out for a campaign that alienated and pushed into the arms of a cynical crook like Nixon the very blue colour workers the Democrats were supposed to exist for.

Listen to us jaded old gits that had our youth blighted by Thatcherism.

Listen to me when I say Mea Culpa I was incurably naive for the last five years thinking Ed Miliband’s beautiful socialist vision might cut it with the electorate, let alone one a country mile to his left.

Listen when I tell you compromising a bit and winning so you can actually do things for our people and save them from the Tories is a million times better than the purest day of theoretical socialism in opposition.

Listen to the voters – the ones who were Labour just ten years ago and now laugh at how out of touch we are with their views and their lives.

But I don’t think they will. I think 20,000-40,000 long term leftists, 25,000 loyal Unite members following the line, and 60,000 fresh out of the box idealists, plus the mad sectarianism of some Labour right wingers refusing to use their second and third preference votes for less than pure Blairite candidates will do it for Jeremy.

And if anything of the Labour Party survives the wreckage, slowly but surely these young idealists will learn their lesson, until one day it is them, not me, being patronising about the defeat of 2020 and how it made them pragmatists.