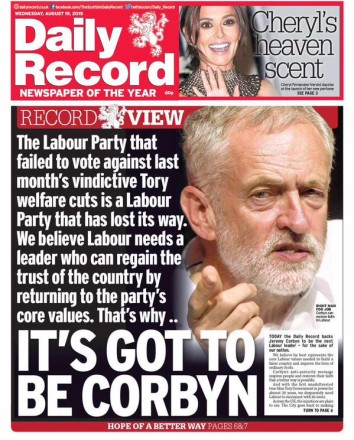 Jeremy Corbyn has won his biggest newspaper backing yet, as the Scottish Daily Record devotes its front page to the leadership contender today. While Corbyn was praised in editorials by both the Guardian and Mirror, they backed other candidates, and his only previous newspaper endorsement has been the Morning Star.

“Corbyn’s anti-austerity message inspires people and restores their faith that a better way is possible.

And with the first unadulterated true-blue Tory Government in power for almost 20 years, we desperately need Labour to reconnect with its roots.”

The paper cites the huge numbers attending Corbyn rallies and the sense of excitement around his candidacy, but say the real turning point was last month’s welfare vote:

“Our rejection of Yvette Cooper, Liz Kendall and Andy Burnham comes after their absurd stance on last month’s vindictive welfare cuts, when all three abstained rather than vote against brutal Tory ideology.

It was a pivotal moment. Failing to see the flaw in abstaining showed flawed judgment and cast doubts on their ability to lead.

More crucially, it was the moment when many would-be Labour voters concluded that the party had truly lost its way.

Corbyn, on the other hand, did the natural and right thing – he voted against the Tories.”