Today the Independent Inquiry into why Labour lost announces the first of its findings. We set up the Inquiry because we wanted an objective, empirical analysis of why Labour lost in May. Our aim is to help Labour understand its defeat and so begin to reconnect with the electorate and rebuild its politics. It will require accepting some hard truths.

The first hard truth is that the Tories didn’t win despite austerity, they won because of it. Voters did not reject Labour because they saw it as austerity lite. Voters rejected Labour because they perceived the Party as anti-austerity lite. 58% agree that, ‘we must live within our means so cutting the deficit is the top priority’. Just 16% disagree. Almost all Tories and a majority of Lib Dems and Ukip voters agree.

The electorate voted for fiscal responsibility. But as the statement on wealth distribution reveals the electorate also holds radical opinions on the economy. 60 per cent agree with the statement, ‘the economic system in this country unfairly favours powerful interests’. This rises to 73% amongst UKIP voters and 78% amongst Labour voters. 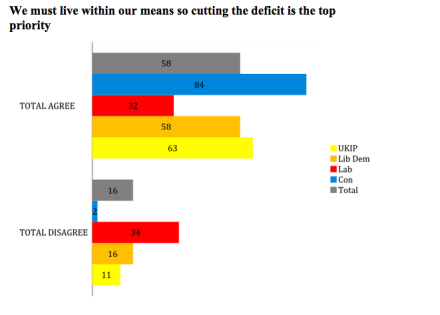 Labour did not recognise the way the electorate is both economically radical and fiscally conservative. Labour’s failure to understand the electorate works both ways. Just 14 per cent of voters think that Labour has the right principles and the right policies. Amongst Labour voters this rises to only 41 per cent. And 31 per cent of voters simply don’t know what Labour stands for.

The Tories won because voters believed they will cut the deficit, even though a majority understand that the economic system is unfair. The Tories message on the deficit was clear, Labour’s was not. The Tories are trusted to manage the country’s finances, Labour is not.

The idea of an anti-austerity alliance with the SNP is unacceptable to a majority of English and Welsh voters. 60% agree that they ‘would be very concerned if the SNP were ever in government’ compared to 15% who disagree.’ A majority of Conservative, Lib Dem and Ukip voters agree, as do 40% of Labour voters. 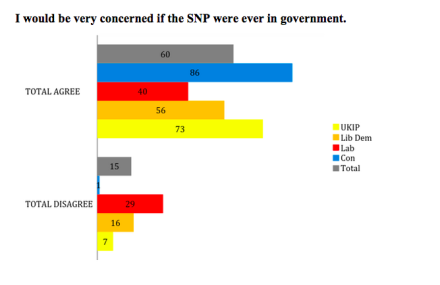 Labour’s defeat in Scotland does not set a precedent for its leftward shift in England. The SNPs anti-austerity politics simply increased the risk that Labour represented to English voters.The response to the SNP amongst Welsh and English voters reflects the increasingly federal nature of the UK, and the growing political salience of a politics of identity and belonging. 63% say that their English or Welsh identity is important to them.

Scotland poses a dilemma for Labour. It has a different political tradition and its voters are more progressive and collectivist minded than in England. The English tend to be more individualistic and have a more ‘small c’ conservative disposition. Labour will need to develop a more federal politics to accommodate the paradoxes of radical and conservative dispositions and our national cultural differences.

The message I take from our poll findings is that the electorate in England and Wales is both economically radical and fiscally conservative. But first comes fiscal responsibility, then economic reform. On the basis of the data, the public appear to think anti-austerity is a vote loser – we cannot ignore that. We can seek to change the views of the public, but it’s best not to ignore them.