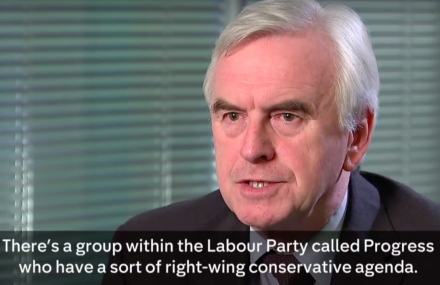 Today has so far seen the resignation of three Labour frontbenchers following yesterday’s reshuffle, with more resignations likely later this evening. Jonathan Reynolds, Stephen Doughty and Kevan Jones have all today stepped down from their shadow briefs as a result of the reshuffle.

John McDonnell, the Shadow Chancellor, has said that thos resigning come from a “right wing clique”, organising around Progress. As we reported in our ongoing reshuffle liveblog:

John McDonnell has accused those who have resigned today as part of “a narrow right wing clique”, and attacked some members of Progress of holding “hard right views”. Speaking to BBC Radio 4, he said of those resigning:

“They do all come from a narrow right wing clique within the Labour Party, based around the organisation Progress largely. I don’t think they’ve ever accepted Jeremy’s mandate really.”

Asked about it on Channel 4 News later, McDonnell said:

“There’s a group within the Labour Party who have a right wing conservative agenda. Within Progress itself, there are some who are quite hard right, and I think they’ve never accepted Jeremy’s leadership.”

However, he added that Labour was a “broad church” and there was room within the party for those views to be debated.

Kevan Jones earlier today said that new Shadow Defence Secretary Emily Thornberry “knows nothing about defence as far as I can see”, adding that he believed “she’s been put in there to agree with the leader”.

Jones, who was on Labour’s Defence team since 2009 before resigning this afternoon, also rubbished the claim that he had stood down as part of a Progress plot – pointing out that he had not even voted for Tony Blair for leader in 1994.

Did the Shadow Chancellor call me a Tory just before we met this afternoon? Sorry, not ok >> https://t.co/yXoxWmBxK7 #proudofprogress

I know @johnmcdonnellMP is tired but he knows better than this. No Tories here. See you on the #Labourdoorstep pic.twitter.com/P2w0bbgy9U