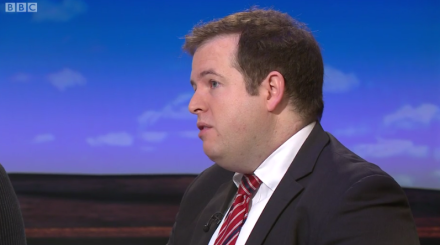 Stephen Doughty has defended the BBC after the broadcaster came under fire for organising for the Labour MP to resign from the frontbench live on the Daily Politics, just minutes before the start of this Wednesday’s PMQs.

Doughty had already written to Jeremy Corbyn to tender his resignation from the Shadow Foreign Office team, but did not make his decision public until appearing on the BBC Two show. He had decided to step down after what he saw as the unfair treatment of sacked Shadow Europe minister Pat McFadden.

According to Political Scrapbook, the BBC published a blogpost detailing how the announcement was arranged through Political Editor Laura Keunssberg, which has since been taken down.

A senior Labour source told Scrapbook: “These events question credibility of all involved … raises questions at the heart of democracy.”

However, in a series of tweets late last night, Doughty laid out how the announcement had come about, and said that the treatment of McFadden and Michael Dugher and led him to want to set out the reason for his resignation clearly. He tweeted:

1. I decided to resign over sacking of colleague + him being smeared. 2. I tell my boss + close friends. 3. Lots of journalists ring me.

4. I answer phone to one senior journalist who asks am I resigning?
5. I say yes but worried about smears + lies about reasons.

6. Am asked if I will do interview on TV to explain my reasons without spinners getting in first. I say yes. 7. I write to Jeremy to say.