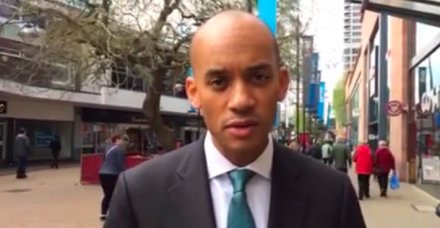 Chuka Umunna has weighed into the row over claims Momentum is set to picket an event with a Labour councillor by describing the pressure group’s behaviour as “madness”.

Members of the group are reportedly organising a picket against Florence Eshalomi, a Lambeth and Southwark councillor, who is seeking election as a Greater London Authority member.

Today Umunna wrote “Why do the Tories’ dirty work for them?” when activists expressed concern on Twitter over the protest.

Eshalomi is due to hold a “pizza and politics” event with Labour MPs Heidi Alexander and Neil Coyle on Wednesday. A member of Lambeth Momentum plans to picket the “Progress Blairite Greater London Authority candidate” Eshalomi, The Times reported.

James Schneider, a spokesman for Momentum, told LabourList the picket had been organised by Friends of Lambeth Libraries, a separate group, who campaign on library services. The library service at three sites will be affected by council budget cuts but Lambeth will continue to have ten places providing library services.

He added on Twitter that they are “fully behind” Eshalomi’s campaign, saying: “There are lots of Momentum people across Lambeth and Southward who are campaigning for both her an Sadiq Khan.”

Schneider also said many of the group’s officers had helped organise Labour’s Flying Start campaign day, which is happening tomorrow. Momentum is organising a “JezweKhan” rally in the evening, he added.

Momentum also said the information about the rally was shared at the end of the meeting as a “parish notice” for those interested in the libraries campaign.

This story was amended to clarify the number of sites offering library services.