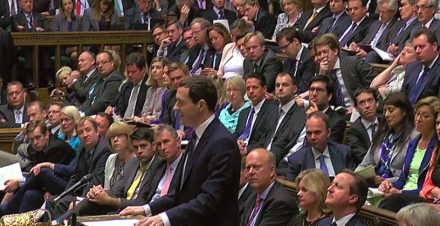 Paul Johnson, director of the Institute for Fiscal Studies, said Britons’ pay packets would suffer from downgrades to productivity growth – the measure of changes in output produced by each worker – and lower growth forecasts.

The think tank also said the Chancellor was running out of “wriggle room” to deliver the budget surplus promised by 2020 and said there was only a 50/50 chance of him getting into the black – the target on which rests many of Osborne’s hopes of replacing David Cameron in 10 Downing Street.

The IFS also described the Chancellor’s plan to cut capital gains tax (CGT) as a “giveaway for the better off”, echoing criticism from a host of senior Labour MPs overnight.

Today the independent IFS shot down the £27bn “windfall” in the public finances which Osborne claimed to have discovered in the Autumn Statement and highlighted the £56bn black hole in the Chancellor’s spending plans over the next five years, as judged by the Office for Budget Responsibility (OBR).

“The Chancellor made rather too much of the £27 billion the OBR found down the back of the sofa in November. As I’ve said on a number of occasions, that was a small change to forecasts and, being cumulated over several years, was not a useful number. What Mr Osborne didn’t tell us yesterday is that rather than finding £27bn the OBR lost £56bn down that same sofa,” Johnson said.

“As it happens, the total loss to the sofa across the two fiscal events is £29bn. That loss largely arises from changes in assumptions about future productivity growth feeding in to lower economic growth over the rest of the parliament. If the OBR is right about that we should all be worried. This will lead to lower wages and living standards, not just lower tax revenues for the Treasury.”

Osborne is already on track to miss two of his three key targets – on the level of debt-to-GDP and breaching the welfare cap – and it is only by moving the date of when certain sets of tax receipts are due to the Exchequer, dubbed “jiggery-pokery” by Labour MPs yesterday, that he was able to claim his plan for deficit reduction was still on course.

“In the longer term the public finances are kept on track only by adding yet another year of planned austerity on the spending side. Spending in 2020- 21 will be £10bn less than planned,” Johnson said.

The think tank also said the plan to cut CGT from 28 per cent to 20 per cent put Osborne in a long tradition of “confused and indecisive” chancellors who were torn between higher rates, to boost Exchequer revenues, or lower rates, to boost investment.

“We need a serious plan and strategy here. This is not the way to make good tax policy,” Johnson added.

At the same event the CGT cut was described as a “very much a giveaway to the better off” for rich people by Stuart Adam, senior research economist at the IFS. Labour MPs have reacted furiously to the reform, which comes as Osborne slashes £590m from Personal Independence Payments (PIPs), support for disabled people.

John McDonnell, the shadow Chancellor said, Osborne was “making it up as he goes along”.

“George Osborne’s failures have been further exposed today. His fiscal rule lies in tatters as the IFS expose his shifty accounting.

“As the IFS have said today the shuffling of money from one year to the next by the Chancellor has been clearly engineered simply so he can claim a surplus and not break the only rule he has left. If the Chancellor has to go to such lengths then even this rule is null and void.

“Millions will also be desperately disappointed to hear that George Osborne has had to continue austerity into the next decade and announce a further £10 billion of spending cuts just so he doesn’t lose any face.

“The IFS confirmed today that while those at the very top benefit the most in George Osborne’s Budget, 370,000 disabled people will get £3,500 a year less due to the PIP cuts  – this  cruel needless cut represents a new low and needs to be opposed by all MPs”