A Conservative disability campaigner has quit his role in disgust for the Tories’ cuts to disability benefits following George Osborne’s Budget.

The former NHS worker left a message for the party on the Conservative Disability Group site, saying “the website is closed due to disability cuts and the resignation because of these of webmaster Graeme Ellis”. 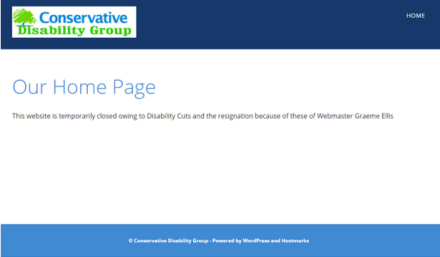 Ellis has said the cuts were “destroying lives” in an interview with the Mirror.

“I’m appalled by what’s happened and wanted to make a very public statement. I’ve been a Conservative voter since I could vote. But as a lifelong Conservative I could no longer agree with what the government’s doing.”

The Conservative Budget cut £4.4billion from Personal Independence Payments, money used to help with costs of having a long-term disability. This follows the cuts to Employment and Support allowance, which removes £30 a week from sick or disabled people.

These cuts were combined with tax breaks for the rich, with a decrease in Capital Gains Tax, a reduction in the number of people who pay the higher rate of income tax and top-ups for those with spare cash to save.

Ellis’ decision was quickly highlighted to Labour MPs. MP Cat Smith wrote on Twitter: “too many disability cuts for Conservative Disability Group webmaster Graeme Ellis who has quit in style”.