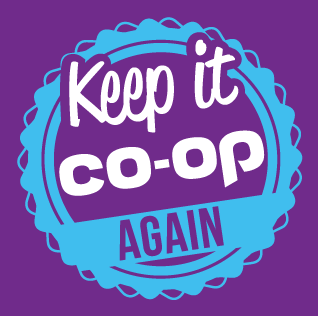 The vote was resoundingly carried. And with another vote this year, we need your help again.

If you bank, shop or insure with the Co-op, you are likely to be eligible. Please do look out for your ballot paper either via email or on your doormat on Wednesday.

Since the vote last year the Co-operative Party has been demonstrating that the faith put in us by those who voted “yes” is well-placed.

We have making the case for an economy that gives everyone a stake, and a share in its success.

Our vision – borne out by the experience of the co-operative and employee owned sectors at home and internationally – is an economy no-longer dominated by short-termism, under-investment and inequality but characterised by alternative ownership models, profit sharing and workplace democracy.  This would be an economy creating wealth in the long-term interests of workers and communities and distributing the rewards more fairly.

There is also clear evidence that giving workers a greater role in the companies they work for could help tackle Britain’s productivity problem too. Higher levels of employee engagement would boost overall UK productivity by an estimated £59bn. Such policies are highly popular, with polls showing that more than 75 per cent of the public agree that they should have a greater say in how companies are run and that employees should share in the profits.

With corporate tax minimisation again in the headlines, the Party is also championing efforts – spearheaded by the co-operative movement – to recognise those paying their fair share.

Launched in 2014 and dubbed the “new Fairtrade” as the latest standard for ethically-minded consumers, the Fair Tax Mark has been spearheaded by some of the UK’s leading retail co-ops, including Midcounties Co-operative, the Co-operative Group and Co-operative Energy. Just this week, the Co-operative Party has become the first political party in Britain to be awarded the same Mark.

And as power is devolved to new combined authorities within City and County regions, the Co-operative Party is setting out its vision.  Whatever your personal view of the new arrangements, change is coming, and we must seize the opportunity to make the biggest positive difference for our communities.  The Co-operative Party and our hundreds of Co-operative Councillors stand ready to be the heart of that work.

From fair tax to fairtrade, credit unions to community energy, the co-operative movement is pioneering solutions to many of the issues our economy and society faces. But if we believe in these ideas, it is vital they continue to have a voice standing up for them in the rooms where decisions are made.

So to keep it going, do use your Co-operative AGM vote to Keep it Co-op.  To support our campaign or find out if you may have a vote visit www.keepit.coop

View all articles by Claire McCarthy