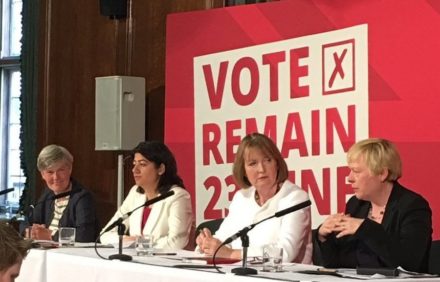 Labour women MPs have been speaking out about the need for women’s voices to be heard in the referendum debate and explaining why remaining in the EU makes sense for women. But with just over a week until polls close, it’s important that grassroots Labour and trade union women now make the case to Remain to women in their workplaces and communities.

Labour has always led the way on equality. Almost every major piece of legislation that has improved the lives of women has been introduced by Labour. Just look at what we have achieved together:

It’s a record to be proud of – but it’s easy to overlook just how important the EU has been in our struggle for women’s rights. Some rights came directly from the EU, some rights were enhanced because of the EU, and our rights as women at work can’t be taken away because they are guaranteed by our EU membership.

The EU ensures that women in the UK have the right to be paid equally, not to be discriminated against, not to be harassed, not to be oppressed because you’re a part-timer, a right to return to work after having a baby, to have a right to take time off to go to ante-natal appointments, the right for fathers to have time off when their children are young.

Of course some may suggest that the battle has been won on women’s rights and that there is no more left to do. But that would be to forget the dogged opposition to progress we have encountered every step of the way, as well as the worrying actions and words of the Tories and UKIP.

Women’s rights are in the firing line whenever there’s a call for deregulation or “cutting red tape”. Under this Tory government, levels of maternity discrimination in the workplace are soaring, and as of the last budget, 86% of the net savings made to the treasury through tax and benefit changes will have come from women. The question on 23rd June has to be: would you trust either the Tories or UKIP to uphold hard won rights for women?

With just over a week to go until the British people go to the polls on the biggest democratic decision in a generation, it is crucial that Labour women speak to as many people as possible about the importance of Europe for women’s jobs and rights at work.  That’s why we are asking all Labour women to mobilise in the coming days. Ask your local party and trade union what campaigning they have planned from now until polling day. You can find details of local and regional campaigning here.

Our equality, our prosperity, our rights and our future, and that of our daughters and granddaughters depend on women voting to remain in Europe. Let’s get out there and tell our sisters about it!