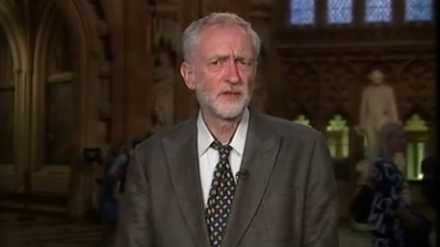 Hundreds of Young Labour members have signed a letter calling for Jeremy Corbyn to resign over the failure to win the EU referendum.

The intervention from nearly 400 Young Labour activists came just hours before the committee of London Young Labour published a statement also demanding Corbyn step down after the EU defeat, which they said was “much worse” than losing a general election.

The open letter the from nationwide Young Labour members said Corbyn did not show sufficient leadership during the EU referendum and that young people need a Labour party to fight for them.

Many of the signatories are “ordinary” members but the list also includes Martin Edobor, chair of the Young Fabians. Together they urge Labour MPs, who will be voting in a motion of no confidence on Corbyn tomorrow, to consider the concerns of younger members.

The two interventions could represent a shift in Corbyn’s support. Young people have made up the majority of new members since last year’s general election but significantly more pro-EU than Corbyn’s “seven and a half out of ten” verdict.

The Young Labour letter, which has not been signed by its ruling committee, reads “we believe that Jeremy Corbyn must step down as Leader of the Labour Party in order to allow the party to choose a successor who can learn the lessons from this referendum and our two general election defeats.

“Recent events have shown that we will not be in a position to support our generation and win power without a serious change at the top.

“Young people need a Labour leader who can learn from both our election defeats and the referendum and reach out to our core supporters as well as swing voters who we need in order to form a government again.”

In a separate statement, the London Young Labour committee write that young people will be damaged by Corbyn’s inability to deliver a Remain vote from Labour heartlands and younger voters.

The two interventions from youth organisations come at the same time at a new anti-Corbyn petition has been launched by a group called Saving Labour. The petition urges the public show support for MPs organising against Corbyn in the no confidence vote tomorrow.

Rival petitions from Corbyn supporters have gained hundred of thousands of signatures collectively, with a 38degrees poll gaining over 200,000 signatures since Saturday and a similar Momentum petition at almost 50,000 signatures.

You can read the full letter from Young Labour members below.

The Labour Party is a democratic socialist party that exists to redistribute wealth, power and opportunity in our society. It is with this in mind that we as young people, young socialists, young trade unionists and members of the Labour Party, express our profound dismay with the result of the referendum particularly in Labour’s northern strongholds.  While we respect the decision of the British people to leave the European Union, we are also acutely aware that it is our generation who will bear the weight of this decision more than most and that we will have to live with the repercussions of Britain’s decision on Thursday. It is we who will suffer from the falling pound, have to tackle long term problems caused by an imperialist Russia and the Middle East at war. It is our generation who will suffer from the decisions made by a right-wing Conservative government that looks increasingly inevitable.

We need a Labour Party that can champion the future of our friends and peers. This means a party that can provide a strong opposition to the post-Brexit Conservative government. The party must also be led by a credible threat to the next Prime Minister and has to be able to fight an early general election in order that we can deliver the Labour victory that our generation so desperately needs. However, the local elections in May and this referendum have shown that the Labour Party is not prepared to achieve this under its current leadership. Moreover, we are extremely disappointed that Jeremy Corbyn did not provide adequate leadership during the referendum which undoubtedly contributed to the referendum result. Although we understand that Jeremy has a long history of Euroscepticism, his nonchalance during the referendum was a betrayal of the very young people who passionately supported him.

It is with this in mind, and with a heavy heart, that we believe that Jeremy Corbyn must step down as Leader of the Labour Party in order to allow the party to choose a successor who can learn the lessons from this referendum and our two general election defeats. This is not a factional request as some of us signing this letter supported Jeremy during last summer’s leadership contest. Some of us had high hopes for what might be achieved on the back of his inspirational campaign, and have fought with full hearts and open minds for Labour victories under his leadership. However, recent events have shown that we will not be in a position to support our generation and win power without a serious change at the top. Young people need a Labour leader who can learn from both our election defeats and the referendum and reach out to our core supporters as well as swing voters who we need in order to form a government again.

Above everything we will always remain loyal to the Labour Party but we hope that Jeremy considers the concerns that we have raised and that Labour MPs will consider their own position in regards to this question.