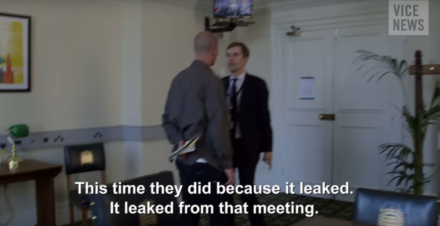 Labour General Secretary Iain McNicol has written to party staff over accusations that Jeremy Corbyn’s PMQs preparations are being regularly leaked to the Conservatives by employees.

The allegation was made by Corbyn’s chief spin doctor Seumas Milne during a documentary released yesterday. In the film Milne, the director of strategy and communications, can be seen saying that details of the pre-PMQs meeting in the leader’s office “leaked” – and that it happens regularly.

A source told The Times that Milne was not suggesting the leaks come from members of Corbyn’s own staff, and that it only happens when workers from the party HQ are present.

Asked whether the Conservatives were aware of the questions Corbyn was going to ask in advance, Milne replies: “This time they did because it leaked. It leaked from that meeting.

“It’s very annoying because it only happens about a third of the time, but it obviously gives them a little bit of extra time. Whenever there is a leak it gives them that advantage. It gives them the advantage on TV as well.”

The suggestion has angered members of staff in the party’s Southside headquarters, and General Secretary Iain McNicol has written to them in an attempt to diffuse the row.

In the letter, McNicol says that he appreciates “this matter has upset a great many of you”, and promises to discuss the issue with trade union representatives. He also hails the “the dedication, commitment and professionalism displayed by Party staff” and says that “your work does not go unappreciated or unnoticed”.

You can read the full letter here:

I wanted to write to you personally regarding the article in today’s Times “Corbyn spin doctor accuses Labour staff of PMQs leaks” and in light of the recent fly-on-the-wall documentary entitled “Corbyn: The Outsider”.

As many of you know, I was elected as the General Secretary of our Party in 2011.

Over the last five years I have seen first-hand the dedication, commitment and professionalism displayed by Party staff on a daily basis.  As I have said on a number of occasions, I am incredibly proud of the work that you do,  whether with elected representatives, activists and members to campaign and win elections, dealing with members of the public who contact us, or making sure our movement reacts quickly and effectively to the disastrous decisions of this dreadful Tory Government, to name but a few.

Every day, including weekends and bank holidays, you work to put our values in to action and for that I am extremely grateful and in awe of your sheer ability to get things done.

I wanted you to know, directly, that your work does not go unappreciated or unnoticed. A couple of Conferences ago I said that we were a ‘movement on the march’. Every single one of you is an integral and vital part of that march.

I know this matter has upset a great many of you and I am meeting with the JTUC this afternoon to discuss it.